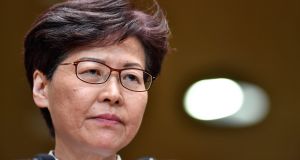 Hong Kong chief executive Carrie Lam: spearheaded the Bill, which would have allowed criminal suspects to be transferred to mainland China for the first time. Photograph: Anthony Wallace/AFP/Getty Images

Hong Kong chief executive Carrie Lam has withdrawn the controversial extradition bill that sparked three months of fierce protests and plunged the city into its worst political crisis since the handover from British to Chinese rule two decades ago.

The bill, spearheaded by Ms Lam, would have allowed criminal suspects to be transferred to mainland China for the first time, but her concession on Wednesday was rebuffed by pro-democracy activists as “too little, too late”.

Ms Lam had previously suspended the proposed law and pronounced it “dead”, but protesters continued to demand its full withdrawal.

Civil Human Rights Front, the group behind the protests, said the withdrawal of the bill, which was one of the demonstrators’ five demands, would not be enough to quell public anger. “We will continue to fight until all the five demands are fully implemented,” it said in a statement.

Alongside the withdrawal of the extradition bill, the protesters want an independent investigation into allegations of police brutality, universal suffrage in the territory, the dropping of charges against all arrested protesters and for protests not to be classified as riots.

Online chat forums circulated screen grabs from Winter on Fire, a documentary film about the 2015 Ukraine protests that is popular among the Hong Kong demonstrators. The screen grabs read: “If we accept the government’s conditions, our friends who have died won’t forgive us.”

Joshua Wong, leader of pro-democracy group Demosisto and face of the 2014 Umbrella Movement, rejected Ms Lam’s move. “Too little too late,” he wrote on Twitter. “Carrie Lam’s repeated failure in understanding the situation has made this announcement completely out of touch - She needs to address ALL Five Demands.”

Ms Lam is understood to back an inquiry modelled on a UK panel, set up after the 2011 London riots, to understand the root causes of the Hong Kong protests, according to two people familiar with the matter. The panel will operate under the auspices of the Independent Police Complaints Council.

“Let’s replace conflicts with conversations, and let’s look for solutions,” Ms Lam said in a televised address. She did not comment on the inquiry.

Starry Lee, a pro-Beijing lawmaker, called the move a “step forward”, adding that continued violence would be damaging to Hong Kong.

Hong Kong stocks gained sharply on Wednesday afternoon following local media reports of Ms Lam’s decision, with the Hang Seng index closing up almost 4 per cent, its best day in 10 months. The gains erased its losses for the year to date, after spending weeks as the only developed market stock index tracked by Bloomberg in negative territory for 2019.

The protests have hit the city’s economy, with consumer confidence dropping and tourism sharply falling. The IHS Markit Hong Kong purchasing managers’ index, which tracks private sector activity in the Asian financial hub, fell to 40.8 in August, down from 43.8 in the previous month, according to data published on Tuesday. The value was the lowest recorded since the financial crisis in 2009.

Robert Grieves, chairman of the American Chamber of Commerce in Hong Kong, said: “Withdrawing the bill is an important first step to restore business confidence and the city’s international reputation.” – Copyright The Financial Times Limited 2019