Trump’s offer to buy Greenland hits a nerve in Denmark 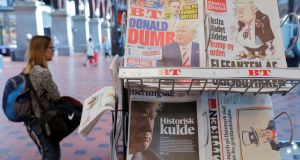 Copenhagen faces a number of difficult questions about its relationship with Greenland and its strategy in the Arctic, and how to combat Chinese and Russian interest in the far north. Photograph: Reuters/Andrew Kelly

For all the apparent absurdity of US president Donald Trump cancelling a state visit to Denmark because it refused to sell him Greenland, the spat has exposed a deep-seated anxiety in Copenhagen.

Danish politicians expressed their anger that a close ally could call off a visit so abruptly – and for such an inconsequential reason, describing it as “disrespectful”, “smug” and “deeply insulting”.

Many in Copenhagen had been inclined to dismiss US interest in the world’s largest island as little more than a joke.

But the US president’s offer to buy the island has, as so often with his seemingly outlandish comments, hit a nerve in Copenhagen, said Klaus Dodds, professor of geopolitics at Royal Holloway in London.

“Denmark doesn’t quite know what to do with Greenland. They genuinely do have a dilemma on their hands. Somebody has told Trump that if the Danes aren’t going to take Greenland seriously, then there’s a chance for us,” said Mr Dodds.

Copenhagen faces a number of difficult questions about its relationship with Greenland and its strategy in the Arctic, and how to combat Chinese and Russian interest in the far north.

Greenland’s relationship to Denmark has long been strained. The island of 56,000 people, which is closer to Washington than Copenhagen, is self-governing in most regards. But it relies on Denmark for foreign affairs and security as well as a DKr3.6 billion (€480 million) annual grant that accounts for two-thirds of the national budget.

A number of scandals, such as the cover-up of radiation from a nuclear crash near a US air base and the treatment of Inuits, have tested the ties with Copenhagen, fuelling the independence movement that enjoys strong popular support.

Denmark has also seemed slow to grasp the geopolitical significance of Greenland and the Arctic. Russia has been raising its military presence in the far north but it is China that has been clearest in its designs on Greenland.

Greenland wooed Chinese investors in an effort to develop three airports to allow better connections to the US and Europe, after Copenhagen appeared reluctant to step in. It was only after it came under intense pressure from the US, which has its own air base in northern Greenland, that Denmark finally intervened last year to offer financing and force out the Chinese.

US officials have admitted that worries about Chinese and Russian activity underpin both their more aggressive approach to the Arctic and the potential for a US bid for Greenland.

“This is an eye-opener for Denmark as to the importance of Greenland,” said Uffe Jakobsen, a professor at the University of Greenland.

Mette Frederiksen, who became Denmark’s prime minister two months ago, is now facing an early and severe test of her diplomatic skills. On Wednesday she sought to strike a balance.

She stressed her irritation at Mr Trump’s sudden cancellation of a state visit after an invitation from the Danish queen and her insistence that Greenland was not for sale. But she also reiterated that Denmark was keen to co-operate more with the US in the Arctic.

According to Jakobsen, Greenland “is the ticket for Denmark’s participation” in the scramble for the Arctic. The Danes have submitted a claim for the North Pole that is solely based on Greenland.

On Wednesday, Mr Trump said that Ms Frederiksen’s remark that his interest in buying Greenland was absurd was not “a very nice way of saying something”. He added: “You don’t talk to the US that way.”

Some believe that Greenland could try to exploit the situation, using Mr Trump’s interest to raise the pressure on Copenhagen in discussions on greater autonomy or even independence.

“My experience is that every time somebody comes to Denmark and says they want to do something with Greenland, then it has a positive effect for Greenland in negotiations,” said Aaja Larsen, one of Greenland’s two MPs in the Danish parliament. “In the long term, it might help Greenland with Denmark.”

For now, Mr Trump’s botched attempt to buy Greenland seems to have unified Danish politicians in outrage and scorn. But they now have to find a way to deal with what Mr Dodds described as “a re-enchantment with the Arctic” by the US after decades of neglect.

A senior Danish official said wryly: “It’s almost funny that we wanted them to be more involved in the Arctic for ages and then they did this.” – Copyright The Financial Times Limited 2019