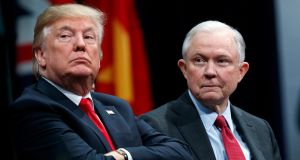 A combative Donald Trump claimed “close to a complete victory” on Wednesday as Republicans expanded their Senate majority but lost the House of Representatives in the US midterm elections.

In a lengthy and highly-charged press conference in the White House, the US president claimed a “tremendous” victory in the elections, in spite of the Republicans’ loss of more than two dozen seats in the House. He also lashed out at the media, telling one journalist to “sit down” and lambasting CNN’s senior White House correspondent as a “rude, terrible person”.

Despite pledging a spirit of bipartisanship as he opened his press conference with prepared remarks, Mr Trump soon went off script, threatening Democrats with a “warlike” response if they tried to use their new subpoena powers to request his tax returns or launch impeachment proceedings.

In a further twist in an already dramatic day in Washington, Mr Trump announced on Twitter shortly after his press conference that attorney general Jeff Sessions had tendered his resignation.

The effective sacking of Mr Sessions, who had fallen out of favour with Mr Trump after recusing himself from the investigation into Russian interference in the 2016 presidential election, immediately raised questions about the position of Robert Mueller, the special counsel heading that inquiry.

During his press conference Mr Trump dismissed the investigation as a “disgrace”, saying: “It should never have been started, because there is no crime.” In a letter to the president, Mr Sessions said he had resigned at the president’s request.

With final results in the midterms still coming in, Democrats were on course to win a comfortable majority in the House of Representatives, winning control of the 435-member chamber for the first time in eight years. But the party always faced an uphill climb in seeking to win back the Senate, and it fell short of the tidal wave of voter support it required to overturn the Republicans’ slim majority.

Every House seat was contested, whereas only a third of the Senate’s 100 seats were up for grabs.

Democrats performed strongly in House contests, picking-up dozens of Republican seats around the country. In a worry for Republicans, suburban America voted Democrat overwhelmingly, suggesting a frustration with the politics represented by Mr Trump. Women candidates also outperformed. More than 100 women were expected to be elected to Congress when the final votes are in.

The midterm elections also saw many firsts. Though high profile Democrats such as African-American gubernatorial candidates Andrew Gillum or Stacey Abrams did not win their seats, a string of progressive candidates rode to victory on Tuesday night.

Rashida Tlaib and Ilhan Omar became the first Muslim women to win seats in Congress. Sharice Davids and Deb Haaland, also Democrats, will become the first native American women to serve in the House, while Davids is also the first gay congresswoman from Kansas.