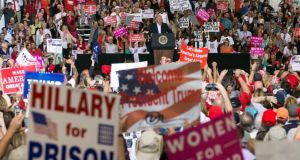 US president Donald Trump speaks at a rally in Melbourne, Florida, on Saturday, during which he appeared to suggest that a terrorist attack had taken place in Sweden the previous night. Photograph: Al Drago/New York Times

On Friday night, Fox News aired an alarming six-minute segment in which the host Tucker Carlson interviewed a documentary filmmaker about a crisis of violence in Sweden ignited by the recent wave of Muslim migration.

“The government has gone out of its way to try to cover up some of these problems,” declared Ami Horowitz, the filmmaker. “That is grotesque,” Carlson responded.

One of his viewers agreed, and in that moment was born a diplomatic incident that illustrates the unusual approach that US president Donald Trump takes to foreign policy, as well as the influence that television can have on his thinking. After watching the programme, Trump threw a line into a speech the next day suggesting that a terrorist attack had occurred in Sweden the night before.

Just like that, without white papers, intelligence reports, an interagency meeting or, presumably, the advice of his secretary of state, the president started a dispute with a longtime American friend that resented his characterisation and called it false. The president’s only discernible goal was to make the case domestically for his plans to restrict entry to the United States.

The Swedes were flabbergasted. “We are used to seeing the president of the US as one of the most well-informed persons in the world, also well aware of the importance of what he says,” Carl Bildt, a former prime minister of Sweden, said by email on Monday. “And then, suddenly, we see him engaging in misinformation and slander against a truly friendly country, obviously relying on sources of a quality that at best could be described as dubious.”

While aides sought to clarify that Trump’s remarks were about a rising tide of crime in general, rather than any particular incident or attack, the president chose to escalate. In a Twitter post on Monday, he accused American journalists of glossing over a dark and dangerous situation in Sweden. “Give the public a break,” he wrote. “The FAKE NEWS media is trying to say that large scale immigration in Sweden is working out just beautifully. NOT!”

“We have challenges, no doubt about that,” he allowed. But he added pointedly, “We must all take responsibility for using facts correctly and for verifying anything we spread.”

Sweden is hardly the first American friend to find itself uncomfortably at odds with the new president. Mexico’s president cancelled a meeting with Trump over his plans to build a border wall and bill the United States’ southern neighbor for it. Trump reportedly lit into Australia’s prime minister in a telephone call that was said to have ended abruptly.

But the episode underscored that Trump obtains, processes and uses information differently from any modern president. He watches television at night and tends to incorporate what he sees into his Twitter feed, speeches and interviews.

“It begs the question of where the president gets his information as he articulates his administration’s global approach,” said Mark Brzezinski, the ambassador to Sweden under president Barack Obama. “To do so in an improvisational way, based on snippets picked up from cable news, is a major mistake and jeopardises an international partnership that advances the American interest in so many ways.”

Immigration is a hotly debated issue in Sweden, Germany and many other European countries. Sweden, which prides itself as a humanitarian leader, processed a record 163,000 asylum applications in 2015. But statistics in Sweden do not back up the suggestion that immigrants have created a crime wave.

Preliminary data released last month by Sweden’s crime prevention council found no significant increase in crimes from 2015 to 2016, even with the influx of migrants. The council did note an increase in assaults and rapes last year, but it also recorded a drop in thefts and drug offenses.

Manne Gerell, a doctoral student in criminology at Malmö University in Sweden, said in an interview that immigrants were disproportionately represented among crime suspects, particularly in more serious and violent offences. But he noted that many of the victims were other immigrants, whether members of criminal networks or simply residents of poor neighbourhoods.

“Immigration will come with some cost, and we will likely have a bit more crime – but that’s in a society with low crime rates and in a society that works really well, so in my opinion, it’s something we can live with,” he said. “I know everybody won’t agree with that. But immigration will not double the crime rate, make everybody go broke or turn Sweden into a living hell.”

Although terrorism is a concern for Sweden – an Iraqi-born Swede blew himself up in central Stockholm in 2010 – the authorities say they are equally worried about racist hate crimes, including attacks on migrants.

In interviews, members of parliament expressed anger at the president. “This statement created an unnecessary discussion and misunderstanding,” said Karin Enstrom, the foreign affairs spokeswoman for the opposition Moderate Party.

The Fox News segment featured an interview with Horowitz, whose short film, Stockholm Syndrome, depicted Sweden as a place where rape and violence have been on the rise since it began accepting more refugees from Muslim countries.

In the Fox interview, Horowitz acknowledged that most Swedes do not see the situation the way he does. “They’ll make excuses for it,” Horowitz said. “The majority of the population in Sweden still wants to have an open-door policy. It’s confounding.”

Trump was clearly struck by the interview, and he cited Sweden at a rally in Melbourne, Florida, on Saturday as he argued for stronger borders. “You look at what’s happening last night in Sweden,” he said. “Sweden! Who would believe this? Sweden. They took in large numbers. They’re having problems like they never thought possible.”

Aides later said “last night” referred to the Fox programme, not to an episode the night before. Carlson argued on Monday that although “the president ought to be precise in what he says, there should be no confusion about what he means”.

Carlson said that assimilation had failed and that immigration was “in the process of totally changing these ancient cultures into something different and much more volatile and much more threatening”.

Horowitz did not respond to a request for comment. Critics of Sweden’s migration policies have pointed to a Facebook post on February 3rd by a police officer, Peter Springare, who said that migrants were taxing Sweden’s pension, education and healthcare systems and that they were the principal culprits in assaults. Some migrants do not have papers and cannot be prosecuted properly, he said.

“Half of the suspects we cannot even be sure of because they don’t have any valid papers,” he wrote. “Most often this means they are lying about their country of origin and identity.”

But the Swedish newspaper Dagens Nyheter on Monday quoted two police officers interviewed by Horowitz, Anders Goranzon and Jacob Ekstrom, saying that the filmmaker had selectively edited and distorted their comments to prove his thesis.

They said that Horowitz had asked them about high-crime neighbourhoods, and that they did not agree with his argument about links between migration and crime.