How long can Donald Trump last as US president?

Edward Luce: Either the forces that are against the US president will bring him down or he will destroy the system. My bet is on the first

US president Donald Trump spent more than an hour berating the press and claiming that “there has never been a presidency that’s done so much in such a short period of time”. Video: The White House 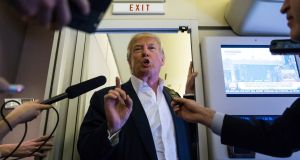 When will he exit? US president Donald Trump speaks with reporters in the press cabin of Air Force One before a rally at Orlando Melbourne International Airport, in Florida on Friday, February 18th, 2017. Photograph: Al Drago/The New York Times

If something cannot go on forever, it will stop. The question is how long that will take with Donald Trump. It is little use speculating about the next four years. Just multiply Trump’s first four weeks and ask how long America’s system can take the strain.

In his first month Trump has declared war on the intelligence agencies and the media. It looks like the judicial branch is next on his list of enemies. There is no middle ground in Trump’s Washington. Either the forces that are against the president will bring him down or he will destroy the system. My bet is on the first. But I would not stake my life on it.

Do not be reassured by Trump’s cabinet. Many of them are experienced individuals. James Mattis, the secretary of defence, Rex Tillerson, secretary of state, and Steven Mnuchin, the nominee for Treasury secretary, are professionals. We may dispute their priorities but we have no basis to contest their hold on reality.

Even Kellyanne Conway, and Sean Spicer – Trump’s controversial adviser and press secretary — would probably look fine if they were working for a different president. Trump could populate his administration with America’s most diligent public servants and it would not change the most important thing. They would still be required to execute the orders of a man who divides the world into friends and enemies — and nothing in between.

Robert Harward, the ex-navy Seal who turned down the job to serve as Trump’s national security adviser, is a harbinger of things to come. In any normal circumstance, someone of Harward’s background would have leapt at the honour of such a high position. But Harward could not stomach the prospect.

It would have meant serving a president who thinks he knows more than his generals about war, more than his spies do about intelligence and more than his diplomats do about the world. The only people with whom Trump agrees are those who agree with him. It is an open question how long it will take for Trump’s existing appointees to reach the same conclusion. There is a thin line between doing your duty and being humiliated.

The US intelligence agencies already appear to have crossed that line. No fewer than nine intelligence sources leaked details of Michael Flynn’s phone call with the Russian ambassador to the Washington Post. Some of this was surely revenge for the contempt Flynn dealt out to intelligence agents, who coined the term “Flynn facts” when he was head of the Defense Intelligence Agency. But some of it was motivated by deep alarm about a president who is so cavalier with US national security.

Trump has likened the Central Intelligence Agency to Nazi Germany and accused it of working for Hillary Clinton. In contrast, he has nothing but praise for James Comey, head of the Federal Bureau of Investigation, whose last-minute intervention helped to tip the election Trump’s way.

The message is clear: be like Comey or be treated as the enemy. It is hard to imagine there are many public servants who see Comey as a role model. Some of them risk their lives at relatively low pay to serve their country. Trump is not their country.

Then there is the lying media – or the “Lügenpresse” as Trump’s alt-right supporters say in echo of the Nazi slur. On Thursday Trump subjected the media to an 80-minute diatribe disguised as a press conference in which he accused them of dishonesty, peddling “very fake news” and conspiracy to undermine his presidency.

His next logical step is to accuse the media of treason. In a tweet he later deleted Trump called the media an “enemy of the American people”. This cannot end well. Anonymous death threats have become a normal way of life for many journalists in Washington. I fear it is only a matter of time before this results in violence. The same applies to the judiciary. The judges who shot down Trump’s “Muslim ban” earlier this month are also receiving death threats.

Where does this end? Panglossian types cling to the hope that Trump will make a course correction. In this happy development, he would clear the White House of firebrands, such as his close advisers Stephen Bannon and Stephen Miller, and replace them with seasoned operators.

Such a purge is possible at some point. It may even be likely. Few advisers can long survive proximity to the white heat of a demagogue. Unless Trump replaced himself, the siege would go on.

Nor can we bank on a personality transplant. Trump could spend 95 per cent of his time taking the advice of experts and 5 per cent going against it. That 5 per cent would still drive the agenda. But Trump is not a reformable character. The more besieged he becomes, the more he lashes out. He is now vowing an investigation into leaks and an implied purge of disloyal officers.

It is hard to predict how long it would take to resolve the battle between Trump and the so-called deep state. It is also hard to say how long a Republican Congress could stand the heat. As I say, multiply the past four weeks by three, or six, or nine. The neutral ground will vanish. At some point this will boil down to a choice between Trump and the US constitution.