Donald Trump and the limits of the US constitution 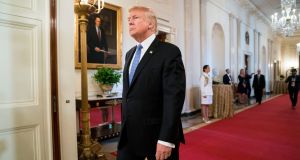 ‘Almost every week for the past year, Donald Trump has said or done things that would have finished another politician.’ Photograph: Doug Mills/The New York Times

“Trump Threatens To Pull America Out Of US Constitution.” Like all the best satire, the beauty of the headline, from Waterford Whispers last month, was that it was outrageous and spiky but also built around a kernel of truth. On the campaign trail and in office, Trump has shown a mix of studied ignorance and breezy contempt for constitutional niceties.

In particular, he vaunts indifference to limits on presidential power. While running for the White House, he vowed to order the US military to “take out the families” of terrorists, which would be illegal under the Geneva Convention. He spoke of “firing” generals, something no president can do. The list goes on.

Even as president, he seems to have difficulty either grasping or accepting that government agencies would operate independently. The issue has come into sharper focus in the past two weeks. First came Trump’s claim that he would not have picked Jeff Sessions as his attorney general had he known Sessions would recuse himself from the investigation into Russian meddling in the election.

That was followed by two more alarming reports: first, that Trump had discussed the possibility of firing Robert Mueller, the special counsel investigating whether the Trump campaign colluded with Russia, and, second, that he had asked advisers whether he could pardon family members, aides or even himself.

In April, when his chaotic, dysfunctional presidency reached 100 days, he blamed the constitutional checks and balances built into the American system for his meagre achievements. “It’s a very rough system,” he said. “It’s an archaic system ... It’s really a bad thing for the country.”

Trump is hardly the first president to grow frustrated with institutional curbs on his power. The same was true of everyone from Wilson to Obama. The problem is that Trump appears quite willing to push up against the constitution’s boundaries. In the process, his presidency could reveal real flaws with the text drawn up by the founders.

US presidents wield huge power, but they are also hemmed in in important ways, chiefly by the legislature and the courts. From the outside, the free media also plays a role. But in making Congress a brake on executive power, the constitution assumes its members will choose to wield that power.

Admittedly, Trump has not had it all his own way on the Hill, but the Republican majority has so far been strikingly reluctant to repudiate the president’s positions. The US national media has been rejuvenated by the Trump presidency, but its power hinges on the assumption that damaging revelations will hurt Trump’s standing among the public, or turn his own party against him.

So far that hasn’t happened. Almost every week for the past year, Trump has said or done things that would have finished another politician. For him, different rules seem to apply.

That leaves the judicial branch. Much to Trump’s indignation, “so-called judges” have halted large parts of his travel ban. But the courts possess only limited powers. As Eric Posner, a professor at the University of Chicago law school, has pointed out, they typically refrain from interfering with the president in military matters or diplomacy.

The longer Trump is in office, moreover, the more judges he will get to appoint. It’s possible that he could have the chance to entrench the conservative majority on the supreme court by making one or two more appointments.

And, ultimately, the fact remains that in practical terms the power of a president is far greater than that of a chief justice. After all, Trump controls the guns, not John Roberts.

One of two things could bring all of this to a head. The first is a major crisis. How an administration this dysfunctional could handle a North Korean missile test that came close to America’s west coast, or a major terrorist attack, is an open question. Or Trump could find himself having to respond to a disaster – a Hurricane Katrina-style event – and mishandle it badly.

Trump won’t pull America out of the US constitution, but he could well test it to its limits

His popularity would suffer, and elected Republicans, who currently live in fear of Trump’s voters and the money the president’s allies could deploy against them, could rediscover their backbones.

The second scenario is that Trump could overreach. Sacking Sessions or pushing defence secretary James Mattis – a man trusted as a moderating influence by mainstream Democrats and Republicans alike – into stepping down could alienate Trump’s party and his key backers.

Or he could even attempt those pardons. The constitution gives Trump the power to pardon other individuals. It doesn’t explicitly say that he can pardon himself, but neither does it say he cannot. If it came to the crunch, it’s a question that would land at the door of the supreme court.

Trump won’t pull America out of the US constitution, but he could well test it to its limits.