Kathy Sheridan: Trump is the biggest snowflake of them all

Yiannopoulos, Scaramucci and now the US president have all got in touch with their feelings

In her short time at the lectern, the White House press secretary, Sarah Huckabee Sanders, has sparred with reporters and come to her boss’s defense. Here’s a closer look at her more memorable encounters. Video: New York Times 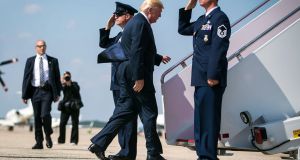 We take our little victories where we can. Take “snowflake”. Once a term of abuse to denigrate a whole generation and then extended by gloating, triumphalist Trumpsters and Brexiteers to despairing liberals, lefties, academics, women and anyone prone to empathy, self-scrutiny or to reading a whole article. But those feathery little ice crystals may be shape-changers. Call it trivial for now, but we may be witnessing the seeds of a reset.

It is almost a year since ardent Trump fan and Breitbart troll-at-large Milo Yiannopoulos brought down the house at a Houston talk by telling a protester that this wasn’t the “silver-haired snowflake show”. “Madam, I’m grateful to you for coming, but to be quite honest with you, f**k your feelings,” he declared, driving the crowd to hysterical heights of “USA! USA! USA!”.

F**k your feelings. Has anyone come up with a better summation of this casually abusive, entitled, I-blurt-what-I-think, speak-as-I-find, in-your-face-bitch era? Twin it with that hilariously unnuanced (fake Voltaire) quote, “...but I will defend to the death your right to say it”, give it a hashtag and ta-dah: #FYF. The motto of the age.

Uber, the car-sharing mobile app predicted to be worth $100 billion in a couple of years, caught the vibe perfectly with its 14 “values” drilled into new workers. These incorporated such gems as “Always be hustlin” and “stepping on toes”. Naturally, the conference room was called the “war room”. Crush everyone. #FYF.

Anthony Scaramucci, the proudly #FYF, testosterone-fuelled greyback, celebrated his elevation to White House communications director by ringing a reporter to savage his new boss’s chief-of-staff as “a f**king paranoid schizophrenic, a paranoiac”. The boss – too cowardly to say “You’re fired!” in real life – was said to be well pleased with his new hire.

We are often lectured about the genius of this boss, the blurter-in-chief himself, who got to be president of the free world because he “tells it like it is”. Examples of such courage include such rapier-sharp critiques as Lyin’ Ted, Crooked Hillary, Cryin’ Chuck; “dummy” John McCain; “crazy”, “sick”, “BAD” Megyn Kelly; “ineffective”, “disloyal” house speaker Paul Ryan and so on and on...

The “genius” apparently, lies in its relatability for the raging, oppressed masses who voted for Trump. Now watch the vox pops and opinion polls for growing signs of blowback to such patronising twaddle. Better still, watch as the #FYF specialists themselves morph into whiny victims when the tide turns.

This is significant, not only because Trump and fans have normalised public discourse as an ignorant, 140-character, slanging match, but because we are advised that this is the kind of bullish, self-aggrandising behaviour required to get anywhere near such alpha males on the pay scale.

Following an investigation into more than 200 cases of sexism, sexual harassment and bullying, Uber had to fire no fewer than 20 people, amid further claims about the mishandling of the medical records of a rape victim and the theft of trade secrets. The fallout has seen the chief executive and the “toe-steppin” value among others banished from the company and the renaming of the “war room” to the “peace room”. So not so much #FYF anymore. A bit like Ryanair.

Milo Yiannopoulous also went a #FYF bridge too far. A video clip emerged wherein he suggested that sexual relationships between 13-year-old boys and adult men and women can be “perfectly consensual” and positive experiences for the boys. The fallout was noisy and disastrous for Milo. And his defence? It was an attempt to cope with his own past victimhood, pleaded the crack #FYF commando who had never left a victim or minority uninsulted.

The six-day reign of the front-stabbing Scaramucci can be swiftly dismissed, except to note his peculiarly snowflakey response to the New Yorker journalist who reported the bonkers conversation: “I made a mistake in trusting a reporter.” Plus his latest podcast, on the subject and use of cocaine, which he and his family take “very seriously”.

And there is the #FYF commander-in-chief himself, the towering, campaign-mode top dog now exposed as the whiniest, neediest snowflake of them all: “No politician in history – and I say this with great surety – has been treated worse or more unfairly.” He is “the reigning king of American victimhood... unceasingly pained, injured, aggrieved”, writes Charles M Blow in the New York Times. Blow’s theory is that Trump won because he whines; he makes feeling sorry for himself feel like fighting back and in this way is a perfect reflection of the new Whiny Right, in their emerging status as victims-in-their-own-minds.

In the UK, where Brexiteers are finally being confronted with their own stupidity, the stench of snowflakey victimhood is eye-watering. Of course it couldn’t be the blatant lies and vacuously emotional rhetoric of the campaign, nor the total absence of a plan, that is forcing the rethink by the messers-in-charge. No, it’s the political establishment about to commit a “great betrayal”, whines former stockbroker Nigel Farage.

As Farage heads for the pub and Trump for the golf course, we may be sure of one thing. It will not be them or their income bracket that will suffer the fallout from the snowflake id.