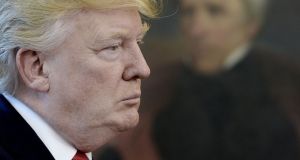 US president Donald Trump just before signing an executive order on trade in the Oval Office of the White House in Washington, DC, March 31st, 2017. Photograph: Olivier Douliery/Bloomberg

US president Donald Trump has sought to push his crusade for fair trade and more manufacturing jobs back to the top of his agenda by ordering a study into the causes of US trade deficits and a clampdown on import duty evasion.

The executive orders came a week after Mr Trump’s promise to replace Obamacare imploded in Congress and a week before he meets with Chinese president Xi Jinping in Florida, a summit that promises to be fraught with trade tensions.

Mr Trump said at a White House signing ceremony that he and Mr Xi were “going to get down to some serious business” next week and vowed that “the theft of American prosperity” by foreign countries would end.

One of the orders directed the Commerce Department and the US trade representative to conduct a 90-day review of the causes of massive US trade deficits.

It will study the effects of abuses such as the dumping of products below costs, unfair subsidies, “misaligned” currencies and “non-reciprocal” trade practices by other countries.

“We’re going to investigate all trade abuses, and, based on those findings, we will take necessary and lawful action to end those many abuses,” Mr Trump said, adding that he wasn’t beholden to any businesses.

Trump administration officials have said they plan tougher enforcement of US trade remedy laws and will initiate more unilateral trade deals. In his 2016 White House bid, the New York businessman campaigned heavily against free-trade deals and accused China of draining jobs from US factory towns with cheap exports.

Chinese vice foreign minister Zheng Zeguang on Friday said the US-China trade imbalance was mostly the result of differences in the two countries’ economic structures and noted that China had a trade deficit in services.

“China does not deliberately seek a trade surplus. We also have no intention of carrying out competitive currency devaluation to stimulate exports,” Mr Zheng told a briefing about the Xi-Trump meeting.

The study of trade abuses appeared aimed at justifying unilateral retaliatory trade actions by the US, said Matt Gold, a former deputy assistant US trade representative who is now an adjunct trade law professor at Fordham University in New York.

“They probably think it will give them better political ammunition,” Mr Gold said.

He added it would not likely reveal anything that is not already in the Office of the US Trade Representative’s annual list of trade barriers, which also was released on Friday. The report criticised China’s excess industrial capacity and requirements for technology transfers and cyber security, which it said are aimed at displacing foreign products with domestic versions.

The trade abuses study will focus on those countries that have chronic goods trade surpluses with the United States.

China tops the list, with a $347 billion surplus last year, followed by Japan, with a $69 billion surplus, Germany at $65 billion, Mexico at $63 billion, Ireland at $36 billion and Vietnam at $32 billion.

The study also will examine past trade deals that have failed to produce forecast benefits for the US, as well as World Trade Organisation rules that US commerce secretary Wilbur Ross said do not treat countries equally, such as on taxation.

The US has long complained that WTO rules allow exports from other countries to be exempt from value-added taxes (Vat), but do not allow equivalent corporate income tax benefits for US exporters.

The Trump administration is considering a border tax that would be levied on imports and which would aim to put the US on a similar tax basis for trade as countries that have VAT.

The second trade order will fight nonpayment and under-collection of anti-dumping and anti-subsidy duties which the US slaps on many foreign goods.

White House National Trade Council director Peter Navarro said some $2.8 billion in such duties went uncollected between 2001 and the end of 2016 from companies in some 40 countries.