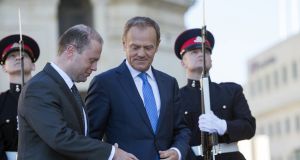 Donald Tusk: The president of the European Council (right), with Maltese prime minister Joseph Muscat, makes it clear in Brexit guidelines that “flexible and imaginative solutions” are needed to avoid returning to a hard Border. Photograph: Rene Rossignaud/AP

The Taoiseach will next week seek to build on EU commitment to protect Ireland’s interests in Brexit negotiations when he meets with German chancellor Angela Merkel in Berlin on Thursday.

Draft negotiating guidelines released on Friday explicitly recognise Ireland’s concerns over the impact of Brexit on the peace process, the Border and the Common Travel Area.

A Government spokesman suggested that Mr Kenny was not seeking further, explicit commitments from Ms Merkel, but to reinforce the European Union’s commitment in the guidelines.

“We are all part of one negotiating bloc, and looking for concessions from single European capitals in not the approach here,” the spokesman said. “This is about all member states understanding exactly where we are coming from and doubling down on our position.”

The draft guidelines, which will be finalised by EU leaders on April 29th, say that protecting the gains made in the peace process will be “paramount” in the negotiations. They call for “flexible and imaginative solutions” to avoid a return to a hard Border, while respecting EU law.

“In this context, the Union should also recognise existing bilateral agreements and arrangements between the United Kingdom and Ireland which are compatible with EU law,” the document says.

The British government gave a cautious welcome to the guidelines, which open the way for talks on a future trade agreement to begin once “sufficient progress” has been made on the terms of Britain’s withdrawal.

In the first phase of the talks, the EU wants to focus on issues such as the rights of EU nationals in Britain and British nationals in the EU, and the settlement of Britain’s financial commitments to the EU.

The guidelines say there should be agreement on “a single financial settlement” before opening talks about a future deal. But Malta’s prime minister, Joseph Muscat, whose country holds the EU’s rotating presidency, said they would not have to immediately agree on the size of Britain’s payment.

“The idea is that we have to come up with a methodology that shows and calculates those commitments, and also what Britain needs to take from European assets, as in a clear balance sheet,” he said.

As pro-Brexit Conservatives welcomed what they saw as signs of flexibility from the EU, foreign secretary Boris Johnson moved to shut down controversy over prime minister Theresa May’s linkage of Britain’s security co-operation with the fate of trade negotiations.

“The UK’s commitment to the defence and security of Europe is unconditional,” Mr Johnson said ahead of a Nato foreign ministers’ meeting in Brussels.

The British government has made energetic efforts since Wednesday to reassure its EU partners that the prime minister’s reference to security in her letter to European Council president Donald Tusk was not meant as a threat.

“Especially after the terrorist attack in London, it must be clear that terrorism is our common problem,” Mr Tusk said on Friday. “That is why I rule out this kind of interpretation and speculation that security cooperation is used as a bargaining chip. It must be a misunderstanding.”

As one controversy subsided, another emerged over a passage in the draft guidelines that appears to give Spain a veto over any post-Brexit arrangement covering Gibraltar.

Jack Lopresti, a Conservative MP who chairs the All-Party Parliamentary Group on Gibraltar, accused Spain of using Brexit “as a fig leaf for trouble-making “over the status of Gibraltar.

“It is shameful that the EU have attempted to allow Spain an effective veto over the future of British sovereign territory, flying in the face of the will of the people of Gibraltar,” he said.