Trump returns to campaign trail with many empty seats at Tulsa 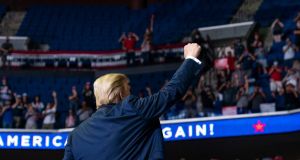 US president Donald Trump speaking in Tulsa: He made no mention of the George Floyd killing protests but used the racially charged anti-China slur “Kung Flu”. Photograph: Evan Vucci

US president Donald Trump’s attempt to reinvigorate his election campaign suffered a setback on Saturday, after a smaller than expected crowd attended his first campaign rally of the season in Tulsa, Oklahoma.

Mr Trump – who last week claimed that almost one million people had applied for tickets – instead addressed an indoor arena which was less than half full. A plan for Mr Trump and vice-president Mike Pence to address an overflow area outside was abandoned because of the lack of people. There were widespread reports that thousands of people signed-up for free without any intention of attending the rally.

Outside the 19,000-capacity arena, protests took place, with many demonstrators holding Black Lives Matter signs, in a nod to the memory of African-American man George Floyd whose death at the hands of white police officers in Minneapolis prompted global protests. While there were some skirmishes between demonstrators and Trump supporters, city officials said the event was overwhelmingly peaceful.

During his speech, Mr Trump made no mention of the recent anti-racism protests that gripped America in the wake of the George Floyd killing. Instead he referred to coronavirus as “Kung Flu”, a racially charged anti-China slur, as he repeated his claim that China was to blame for the spread of Covid-19.

On the issue of coronavirus, Mr Trump also said the increase in cases in the United States reflected the fact that more testing was taking place, stating he had asked his aides “to slow down the testing”.

Shortly before his arrival in Oklahoma, it emerged that six members of his campaign team who had organised the rally had tested positive for Covid-19. Tulsa has seen a sharp increase in coronavirus cases in recent weeks, and few people in the crowd wore masks or observed social distancing measures. Earlier, the mayor of Tulsa cancelled a plan to impose a curfew in the city, following a phone call from the president.

Mr Trump’s comeback rally – his first, since the coronavirus pandemic halted large-scale gatherings – was also overshadowed by controversy over his decision to fire the Southern District of New York attorney Geoffrey Berman. On Friday, the justice department announced that Mr Berman – who has been investigating several associates of Mr Trump – was being removed. But the federally appointed prosecutor in Manhattan said he had no intention of stepping down. This led attorney general Bill Barr to announce that the president had personally fired him.

The standoff was eventually resolved on Saturday afternoon when Mr Berman said he would step down after the justice department agreed to put his deputy in charge – and not the head of the Security and Exchange Commission, a Trump ally originally proposed by Mr Barr.

The firing of Mr Berman sparked widespread condemnation and allegations that Mr Trump is trying to interfere in the legal process in the country, 4½ months before a presidential election.

Attorney for the Southern District of New York is traditionally a powerful position – it was previously held by Rudy Giuliani before he was New York mayor; former FBI director James Comey; and Preet Bharara, who was fired by Mr Trump in the first year of his presidency.

Jerry Nadler, the Democratic chairman of the Judiciary Committee, invited Mr Berman to testify in Congress this week.

“We’ve seen a pattern of the president and Barr corrupting investigations. This is just more of the same,” he said.

He also said he believed Mr Barr should be impeached but said it would be a pointless exercise because Republicans in the Senate would not consider it.

Meanwhile, a book written by former national security adviser John Bolton will be published as planned this week after a court blocked a last-minute attempt by the justice department to halt its publication.

Mr Bolton, who served in the Trump administration for 17 months, was scheduled to give his first on-air interview on Sunday night. His book contains a number of damning allegations about the president, including promises he made to authoritarian foreign leaders, and further details on the Ukraine crisis which led to Mr Trump’s impeachment.