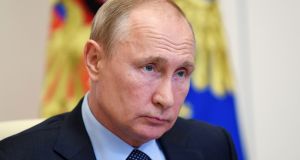 Grigory Winter, a human-rights activist in the northern Russian city of Cherepovets, was surprised one day in April to find seven security officers and two riot policemen waiting outside his front door.

As the officers ransacked his apartment, Mr Winter was even more surprised to learn the justification for the search: a post he had written on social media a few days earlier claiming that officials were transferring prisoners with coronavirus symptoms without taking precautions against the disease. Investigators in Cherepovets say no corrections officers or prisoners were diagnosed with the disease at the time.

The case against Mr Winter is one of dozens Russian authorities have filed this spring after President Vladimir Putin approved increased punishments under a fake news law passed last year for “knowingly spreading false information” about the pandemic.

Some have spread rumours and conspiracy theories. Others, like Mr Winter, have claimed Russia’s response has been woefully inadequate or that officials are hiding the true extent of the pandemic – and now face up to five years in prison for criticising it.

After implementing strict lockdown measures in late March, several weeks after most other countries, Russia has sought to keep information about the pandemic under equally tight control. The government coronavirus task force has a special “fake news” division, while the Investigative Committee, an FBI-like law enforcement agency, tracks coronavirus on messaging apps.

In a statement, Kremlin spokesman Dmitry Peskov told the Financial Times: “Unfortunately, nobody in the world has won the war with fakes yet. The surfeit of information technologies is only aggravating the situation. We are continuing this struggle.”

Prosecutions under the fake news law have shot up since Mr Putin signed the additional provisions on discussions of the pandemic, which parliament rushed through in a single day.

“The specific charges to be filed and punishment to be administered are determined by the seriousness of the deed committed and subsequent consequences,” she said.

Mr Winter is no stranger to run-ins with local authorities – last year he was sentenced to 280 hours’ community service under the law against insulting public officials in a dispute over plans to cut down a forest. He is one of the few people to face jail time for posting, which he claims is retribution for his years of campaigning against police and prison officials in Cherepovets.

“I insulted the prison bosses, so they decided I had to be punished one way or the other,” Mr Winter said.

The vast majority of the charges have been brought against ordinary people whose posts have little reach outside their immediate social group, said Sarkis Darbinian, chief legal officer at privacy rights group Roskomsvoboda.

“The Kremlin doesn’t have any kind of real programme, they’ve let the genie out of the bottle. They criminalised the statute and now local police are deciding when to file charges,” Mr Darbinian said. “It’s obvious they’re trying to frighten citizens so they don’t write anything and are scared to post.”

In several cases, police have published videos from suspects’ interrogations in which they confess to and repent of their crimes.

A week before Russia’s lockdown began, a court fined Oksana Garipova, a hairdresser in the town of Nizhnekamsk near the Volga, Rbs30,000 (€380) for recording a voice message on WhatsApp claiming that local authorities would introduce compulsory quarantine.

Ms Garipova then appeared on one of Russia’s most popular talk shows to apologise for the message, which she said was a “prank” meant to be shared among her friends.

“These conspiracy theories are basically part of state ideology, but they can’t let ordinary people do it because it might end up with them taking to the streets, and that’s inadmissible,” said Andrei Kolesnikov, a fellow at the Carnegie Moscow Center. “Then the police get involved and these people have to be punished. The ordinary people don’t really know what they’re talking about, but they’re the ones who get punished.”

Several other defendants have said their messages were intended as parody. In April, investigators charged Alexander Thorn, a videoblogger known for impersonating Mr Putin and his cabinet, for a satirical video containing lurid claims about the origins of coronavirus and Microsoft founder Bill Gates and 5G towers.

The channel pulled the episode after a public outcry, but did not say if Mr Mikhalkov’s show would return to the air. A few days later, Russia’s general prosecutor’s office said it had determined that unspecified videos making allegations about Mr Gates were fake and ordered internet censors to ban them from social media.

Nonetheless, a segment aired in April from Man and Law, a long-running show on Russia’s most watched network that also made far-fetched accusations about Mr Gates’s alleged exploitation of the pandemic to introduce “digital slavery”, remains available on Channel One’s website.

“We have always interpreted absurd opinions such as those about 5G towers as expressions of extreme incompetence,” Mr Peskov said.

An unrepentant Mr Mikhalkov complained of “hysterical fear” over his show and released the next episode of Demon Expeller on YouTube.