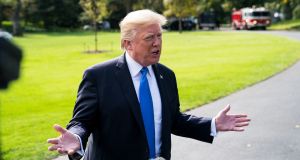 US president Donald Trump hit out at claims of Russian collusion and lambasted the Democratic Party in a series of tweets on Sunday, amid reports that the first arrest in the Russia investigation headed by Special Counsel Robert Mueller could be made early as Monday.

Mr Trump, who spent the weekend at the White House, published five tweets on Sunday in which he chastised the “lack of investigation on Clinton made Fake Dossier, the 33,000 plus deleted Emails, the Comey fix and so much more,” insisting that Russian collusion “doesn’t exit.”

He tweeted: “The [Democrats] are using this terrible (and bad for our country) Witch Hunt for evil politics, but the [Republicans are] now fighting back like never before. There is so much GUILT by Democrats/Clinton, and now the facts are pouring out. DO SOMETHING!”

He also said it was not coincidental that “this Russia talk” was surfacing when Republicans are making a big push towards tax reform.

Mr Trump appeared to be referring in his tweets to reports last week that the Clinton campaign paid for research that led to the infamous Steele dossier, a report compiled by ex–British spy Christopher Steele which made salacious allegations about Mr Trump’s links with Russia.

Sunday’s Twitter tirade by the president followed reports by CNN and Reuters that the federal grand jury in Washington had approved the first charges in the Mueller investigation. The news network said that an arrest in connection with the investigation could be made as early as Monday.

Ty Cobb, the White House lawyer handling the response to the Russia investigation, said that the president’s tweets were “unrelated to the activities of the special counsel, with whom he continues to cooperate.”

Mr Mueller was appointed by deputy attorney general Rod Rosenstein in May as special counsel to oversee the investigation into Russian interference in the 2016 US presidential election after Mr Trump fired the head of the FBI, James Comey.

US intelligence services had already announced in January that they believed that Russia had interfered in last year’s election. But it is believed that Mr Mueller is also investigating possible collusion between the Trump campaign team and Russia.

The Mueller team interviewed former White House chief of staff Reince Priebus and former press secretary Sean Spicer in recent weeks as the investigation into Russian collusion into the election deepened. Separate investigations are being conducted by the House of Representatives and the Senate.

Despite the reports that the federal jury in Washington had approved the first charges in the investigation, the identity of those who may be indicted has not been revealed.

As Republicans braced themselves for the possible fallout from any arrests in the investigation, Senator Susan Collins of Maine and a member of the intelligence committee said that while she had seen “lots of evidence that the Russians were very active in trying to influence the elections,” she had yet to encounter “any definitive evidence of collusion.”

Mr Trump’s apparent attempt to deflect from speculation about the investigation in his torrent of tweets on Sunday comes days after Congress moved to investigate Russia’s attempts to gain a foothold in the United States’ uranium industry during the Obama administration, something that Mr Trump has strived to highlight in recent days.

Mr Trump and some Republicans have also previously questioned the independence of Robert Mueller, noting that he previously worked with Mr Comey.