Tens of thousands of pro-unity demonstrators waving Spanish, Catalan, and European Union flags took to the streets of Barcelona on Sunday (October 29) as the country faced its worst political crisis in the four decades since its return to democracy. 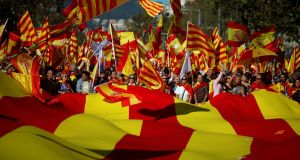 “Don’t be ashamed of loving Spain, be ashamed of hating it,” read one banner that was being brandished at Sunday’s massive demonstration in Barcelona against independence and in favour of Spanish unity.

Spanish flags filled the Passeig da Gràcia, the broad street running through the city’s centre where the event took place, and many of the hundreds of thousands of people present wore them wrapped around their shoulders, like capes. Some participants rode mopeds to and from the event carrying the flag aloft. Meanwhile, “Viva España” pumped out of giant loudspeakers.

“People have realised that we have to get out on to the street, we have to do that because we’ve been silent for a long time,” said Abel Reboredo, a travel agent who was carrying a heart-shaped banner bearing the Spanish, Catalan and European flags on it. “We have to make people realise that there’s another Catalonia, one which feels Spanish and which doesn’t have any problem in saying that.”

Catalan unionists appear to have been emboldened by the dramatic events of last Friday. The Catalan parliament approved a declaration of independence, sparking celebrations among separatists. But the same afternoon, the Spanish senate approved a motion allowing the central government to introduce direct rule in the region, including removing from office the Catalan president Carles Puigdemont and his entire cabinet, and calling elections in December.

For Reboredo and others who took to the streets on Sunday, it was a chance to celebrate what they saw as a restoration of constitutional order in the northeastern region. “The nationalists have created a false narrative in order to gain votes, in pursuit of an impossible objective,” said Reboredo. “We’re here to defend what we are, and what our parents and grandparents were.”

Until recently, pro-union Catalans had struggled to find a united voice and mobilise, despite the fact that polls showed they formed a narrow majority in the region. Meanwhile, those who wanted independence regularly staged massive demonstrations. But this is the second such show of force by unionists in Barcelona in the last month, reflecting not just their numbers but also how divided the region has become.

“The only day I can get the Spanish flag out is when there’s a big demonstration because that’s the situation they’ve put us in,” said Federico Teixedó, a motorbike delivery man. “The Catalan president only governs for the half of the population that is pro-independence, he hasn’t governed for us, the unionists, the constitutionalists.”

Albert Rivera, leader of the liberal Ciudadanos party, took part in the demonstration and tweeted: “The Catalonia that also wants to be Spanish and European has broken its silence.”

While many of those present agreed with the Spanish government’s decision to implement direct rule by triggering article 155 of the constitution, some wanted to see it take an even harder line. Teixedó believes Madrid should take control of the Catalan public broadcaster, TV3, for example, which he and many other unionists accuse of pro-independence bias.

“The measures could be rather tougher, given the government we’ve had in Catalonia,” said Margarita Obregón, a 69 year old who had come out to demonstrate despite the fact that she needed a crutch.

“What happened on Friday should never have happened,” she said. “They should have used article 155 earlier.”

Despite the mainly festive atmosphere, anger was also in the air, with chants calling for Puigdemont to be imprisoned. The attorney general is soon expected to present legal action against him and other independence leaders, which could lead to jail sentences.

There were occasional violent scenes during the afternoon and members of far-right groups were seen making fascist salutes.

But others who took to Barcelona’s streets despaired at the binary nature of the Catalan crisis.

“The problem is that in the current situation people’s opinions are being radicalised,” said Fernando Otero, a dentist in his 20. “You’re not allowed to have an opinion in the middle that says both sides are getting it wrong. You have to take sides and that makes more and more people go to the extremes.”

Otero said he had hoped the Catalan and Spanish governments would negotiate a way out of the crisis before Friday’s drama. Previously a supporter of Ciudadanos, which has been stridently making the case for direct rule for several months, he now says he prefers the more moderate proposals of the Catalan Socialist Party, which advocates reform of Spain’s territorial model.

“There’s no reason why we should be facing off over this, because in the end we’re all Catalans and we all have Catalonia’s best interests at heart,” he said.