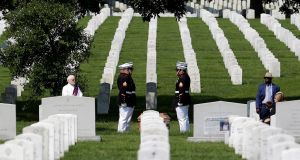 US Marines stand at attention during an interment ceremony in Arlington National Cemetery’s Section 60, which contains the graves of many members of the US military killed in Afghanistan. Photograph: Joshua Roberts/Reuters

President Donald Trump is likely to approve to a modest increase in US troop numbers in Afghanistan when he lays out his strategy on Monday, officials said.

Mr Trump will give a prime-time address to the nation at 9pm (1.00am Irish time) to detail his view of the US role in Afghanistan, an issue that vexed his two predecessors.

With the Taliban no nearer to defeat, the most likely outcome is that Mr Trump will agree to sending more US forces as recommended by his senior advisers, a senior administration official said.

Current US troop numbers are about 8,400.

Mr Trump has long been sceptical of how the US is fighting the war in Afghanistan, which was launched by President George W Bush in October 2001 after the September 11th attacks on New York and Washington.

Mr Trump announced a strategic review soon after taking office in January and has privately questioned whether sending more troops is wise, US officials said.

“We’re not winning,” he told advisers in a July meeting, questioning whether General John Nicholson, who leads US and international forces in Afghanistan, should be fired, an official said.

But Defence Secretary Jim Mattis has argued that a US military presence is needed to protect against a continuing threat from Islamist militants.

Mr Trump may or may not give an actual number on Monday for the expected troop increase, said an administration official. Two participants in the months-long discussion about an Afghan strategy said the president is likely to reiterate his authorisation for Mr Mattis to decide the troop level, thus giving the green light for the military to send more forces to Afghanistan.

A US-led coalition invaded Afghanistan and overthrew the Islamist Taliban government for harbouring al-Qaeda militants who plotted the September 11th attacks. But US forces have remained bogged down there through the presidencies of Mr Bush, Barack Obama and now Mr Trump.

“I took over a mess, and we’re going to make it a lot less messy,” Mr Trump said when asked about Afghanistan earlier this month.

Officials cautioned that the Republican president could still change the approach on Afghanistan, agreed to with senior officials last week, before the televised speech.

He will deliver his third prime-time address to the country as president from Fort Myer military base in Virginia, just across the Potomac River from Washington.

Mr Trump is also expected to approve a more aggressive US counter-terrorism policy for Afghanistan and Pakistan, participants in Afghan strategy discussions said.

That will include more use of drone strikes and US special operations forces against Taliban, Islamic State and other groups’ leaders, training facilities, bases, and operations in Afghanistan and Pakistan, they said.

Russians grant Putin right to extend his rule until 2036 in landslide vote 07:32
Trump says Covid-19 will disappear after US reports record increase 07:02
Leicester lockdown could be just the start if tracing system not improved – Labour 22:30
Trumps to travel to South Dakota for July 4th despite rise in US coronavirus cases 20:33
World takes stock of Covid-19 drug after US snaps up supplies 20:24