US court hears details of ‘dark and disturbing’ killing 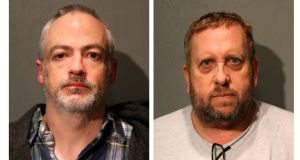 Wyndham Latten (left) and Andrew Warren, who are accused of fatally stabbing a man and then fleeing across the country in an attempt to avoid capture. Photograph: Chicago Police Department via AP

Since the death last month of a man in a downtown luxury apartment in Chicago, details had trickled out, perplexing and graphic. Two employees of elite universities were accused of fatally stabbing the man and then fleeing across the country in an attempt to avoid capture.

But on Sunday, as the two university workers stood before an Illinois judge for the first time, prosecutors laid out a plot still darker and more gruesome. Before the killing, the two men – Wyndham Lathem, who had been a professor at Northwestern University, and Andrew Warren, an administrator at the University of Oxford in England – had talked for months in an internet chat room about their “sexual fantasies of killing others and then themselves”, prosecutors said.

The attack, the prosecutors indicated, was the culmination of those conversations, with Lathem paying to fly Warren to the United States and the two men carefully plotting the killing of Lathem’s boyfriend, Trenton Cornell-Duranleau. Prosecutors said the men attacked Cornell-Duranleau, 26, as he slept, stabbing him 70 times. His throat was slit, according to prosecutors, his head nearly cut from his body. His final words, according to authorities: “Wyndham, what are you doing?”

Brendan Deenihan, a commander for Chicago police, on Sunday described the killing this way: “It was not domestic in nature, like a husband-wife or boyfriend-boyfriend or a love triangle. That was not the motive. It was a little more dark and disturbing, as far as I’m concerned.”

Barry Sheppard, a lawyer for Lathem (43), said after the hearing that his client was “a distinguished microbiologist” and urged the public “not to engage in a rush to judgment”.

“He has led a lifetime of outstanding, unblemished citizenship,” Sheppard said of his client, who appeared before the judge in glasses and a patterned flannel shirt. A public defender representing Warren did not speak to reporters, but told the judge that her client lived with his sister in England and said he hoped the court would set bail.

Warren (56) wore an oversized gray T-shirt, and trembled slightly as prosecutors described the case to the judge. When asked whether he wanted the British Consulate notified, he said “no”.

The judge, Adam D Bourgeois Jr of the Cook County Circuit Court, ordered each man held without bail on a charge of first-degree murder, saying that there were no bail conditions he could impose that would ensure the safety of “the city of Chicago”.

In an attempt to have his client freed on bond, Sheppard submitted letters of praise from Lathem’s colleagues, but they did not sway the judge. “There must be 20 PhDs” among the letters, Bourgeois said. “The court has reviewed his professional and academic achievements – some of the finest in the world. Has nothing to do with this, though.”

All along, the details that emerged about the case had been odd and troubling, but the circumstances laid out by the Cook County state’s attorney’s office Sunday were deeply disturbing. According to court documents, the initial plan was for Lathem and Warren to kill Cornell-Duranleau – and perhaps others – and then one another.

A few days after Warren arrived at O’Hare International Airport and was picked up by Lathem, they prepared for the killing, the prosecutors said: Lathem was to kill his boyfriend with a drywall knife while Warren was to record it on a cellphone, though no recording was made.

But when Cornell-Duranleau awoke and fought back in the early morning hours of July 27th, Warren also took part in the attack, prosecutors said. They said that Warren had admitted to using kitchen knives and a metal lamp to attack Cornell-Duranleau.

According to prosecutors, the defendants had intended to kill one another – Warren was to shoot Lathem while he was stabbing Warren. But the men instead fled the apartment and Chicago, prosecutors said, stopping twice to leave cash donations in the name of Cornell-Duranleau: one for $5,610 at a health centre in Chicago and one for $1,000 at a public library in Lake Geneva, Wisconsin.

From the library, the prosecutors said, Lathem also called the Chicago apartment tower to alert a guard to check on his apartment, where Cornell-Duranleau’s death had not yet been discovered.

The two men then fled to the US west coast and their photographs began appearing on Chicago police wanted posters. They turned themselves in to authorities in California eight days after the killing. Warren, who had arrived in the United States on his first visit a few days before the attack, surrendered to officers in San Francisco on August 4th. Later that day, Lathem, who was fired by Northwestern after authorities began searching for him, turned himself in to federal agents in nearby Oakland.

Neither man contested extradition to Illinois, and they arrived back in Chicago late on Friday. While the men were on the run, Lathem sent a video message, prosecutors said, to his parents and friends. In it, according to prosecutors, he admitted to the killing and told his loved ones “that he is not the person people thought he was”.