The Irish Times view of US policy change on Israeli settlements: Reckless and irresponsible

By giving Israel a green light to accelerate settlement-building in the West Bank, Trump may have guaranteed the indefinite prolongation of a political, security and humanitarian crisis that will long outlive his sorry presidency 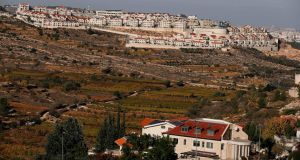 The Israeli settlement of Efrat, near the Palestinian city of Bethlehem, south of Jerusalem, in the occupied West Bank. Photograph: Menahem Kahana/AFP via Getty Images

The Trump administration’s announcement that it is to break with the 40-year-old US position on Israeli settlements in the West Bank – a position that held they are “inconsistent with international law” – may not have come as a surprise, given Trump’s lamentable record on the Israeli-Palestinian question, but that does not make the decision any less reckless or irresponsible.

The move reverses a 1978 legal opinion that has guided US policy since Jimmy Carter’s presidency. Announcing the shift, secretary of state Mike Pompeo claimed it was not intended to prejudge the status of the West Bank and said Washington was merely reverting to Ronald Reagan’s view that settlements were not intrinsically illegal. What Pompeo neglected to mention was that Reagan also stated that the settlements were ill-advised and an obstacle to peace – a view neither Trump nor Pompeo appears to share.

Far from it. The latest policy change is consistent with Trump’s approach to the conflict, which has been to abandon any pretence that the US wishes to be an honest broker. In 2017, Trump recognised Jerusalem as the capital of Israel – and subsequently moved the US embassy from Tel Aviv to the disputed city. Then, last March, Trump’s recognised Israel’s 1981 annexation of the Golan Heights from Syria.

Pompeo’s claim that Israeli settlements are not illegal per se under international law does not make it true. The international community regards the transfer of any country’s civilians to occupied land as illegal under the Fourth Geneva Convention of 1949 and UN Security Council resolutions. It was important that EU foreign policy chief Federica Mogherini quickly rejected the new US position and called on Israel to end all settlement activity. Minister for Foreign Affairs Simon Coveney rightly reiterated Ireland’s support for that position.

Trump’s motivation appears to be narrowly political. The decision will please evangelical Christians, an important part of his base. The timing suggests the move may also be designed to help Binyamin Netanyahu, the longtime Israeli prime minister and a Trump ally, who looks likely to face yet another election soon.

The chances of reviving talks between Israelis and Palestinians on Trump’s watch were already non-existent. The economic part of the grand plan prepared by Trump’s son-in-law, Jared Kushner, was ridiculed when it was published earlier this year; few hope for anything better from the political proposals. But the latest decision could make matters worse. By giving Israel a green light to accelerate settlement-building in – and even formal annexation of – the West Bank, Trump may have guaranteed the indefinite prolongation of a political, security and humanitarian crisis that will long outlive his sorry presidency.