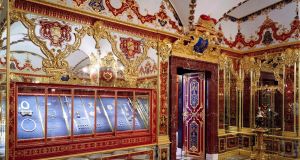 As federal police continue their investigation into the incident, officials for Saxony’s state museums are facing growing criticism of multiple failures at a museum they once claimed was “as safe as Fort Knox”.

At about 5am on Monday, two thieves removed part of a window grille at the former Saxon royal palace on the banks of the Elbe river. They then removed the window pane behind, rushed into the jewel room of the Green Vault and smashed open display cases with axes – removing rare diamond and pearl jewels from the 18th century.

Two security staff on duty saw the thieves inside the museum on closed-circuit cameras, but instead of hitting a special alarm button, they dialled 110. Within five minutes police were at the scene, but the thieves were already gone.

“Several alarms were triggered: through the break-in and through the motion detectors in the room and the break-in to the glass cases,” said Dr Marion Ackermann, general director of Dresden’s state art collection.

A day after the theft, police said they had received more than 90 tip-offs but no firm leads as to the whereabouts of the thieves or the jewels.

On Tuesday, police confirmed that a burnt-out Audi found in an underground car park in Dresden, 15 minutes by car from the scene of the heist, was the first getaway vehicle used by the thieves. Investigators believe the thieves changed to a second car before continuing their escape.

“Everything points to a targeted and well-prepared crime,” said Olaf Richter, a local investigator.

Police believe there was a link between the break-in and a fire at a local electricity substation that forced a power cut and plunged the entire area around the palace into darkness at 5am.

Under cover of darkness, thieves were able to gain access to the palace and flee again.

Murky camera footage, released by police, shows two masked individuals with torches using an axe to smash the security glass of the jewel cases. Dr Ackermann said the theft was not as bad as initially feared “because all objects were individually fastened, tied with stitches [to] the background”.

Police have released 10 photographs showing the items believed lost, all part of what Dr Ackermann has described as the “priceless” crown jewel collection of Augustus the Strong, the Saxon king.