Corbyn says ‘vile’ anti-Semitism has no place in his party 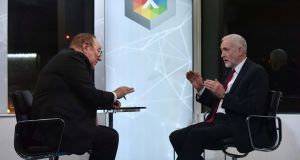 Labour leader Jeremy Corbyn on BBC TV’s The Andrew Neil Interviews. “What I’ll say is this. I am determined that our society is safe for people of all faiths.” Photograph: BBC/handout via Reuters

Jeremy Corbyn has described anti-Semitism as “vile and wrong” with no place in the Labour Party, but he declined to apologise to Britain’s Jews for his handling of the issue.

Britain’s chief rabbi Ephraim Mirvis has accused Mr Corbyn of allowing “a new poison” of anti-Semitism to take root in his party.

In an interview with Andrew Neil on BBC television on Tuesday evening, the Labour leader declined four invitations to apologise for his handling of allegations of anti-Semitism.

“What I’ll say is this. I am determined that our society is safe for people of all faiths. I don’t want anyone to be feeling insecure in our society, and our government will protect every community against the abuse they receive on the streets, on the trains, or in any other form of life.”

Speaking earlier on Tuesday at the launch of his party’s Race and Faith manifesto, Mr Corbyn said Labour was a party of equality and human rights, with no place for anti-Semitism.

“There is no place whatsoever for anti-Semitism in our society, our country or in my party, and there never will be so long as I’m leader of the party.

A number of MPs who have left Labour since Mr Corbyn became leader in 2015 have cited his handling of allegations of anti-Semitism. Jewish MPs including Luciana Berger, who is now a Liberal Democrat, and Ruth Smeeth have suffered sustained anti-Semitic abuse, often from people claiming to be supporters of Mr Corbyn.

The Equality and Human Rights Commission, a statutory body, is investigating whether Labour has unlawfully discriminated against, harassed or victimised people because they were Jewish.

And the Jewish Labour Movement, one of the oldest socialist societies affiliated to Labour, is not campaigning for the party in the general election.

Other faith leaders, including Archbishop of Canterbury Justin Welby, expressed support for the chief rabbi, and the Muslim Council of Britain (MCB) offered its solidarity.

An MCB spokesperson said the unacceptable presence of anti-Semitism was a source of real fear for British Jews, and said the chief rabbi’s intervention had highlighted the importance of speaking out against racism.

“It is abundantly clear to many Muslims that the Conservative Party tolerate Islamophobia, allow it to fester in society,” the spokesperson said.

The Conservatives have promised to begin an investigation into Islamophobia and other forms of prejudice in the party before the end of the year.

Boris Johnson, who has himself been accused of showing prejudice against Muslims in his writings, on Tuesday rejected the MCB’s claim that his party’s approach to Islamophobia is one of denial, dismissal and deceit.

“What we do in the Tory party is, when anybody is guilty of any kind of prejudice or discrimination against another group, then they’re out first bounce.”