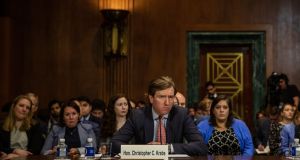 Chris Krebs (centre), then head of the Cybersecurity and Infrastructure Security Agency, appears before the Senate Judiciary Committee in Washington on May 14th, 2019. File photograph: Amr Alfiky/The New York Times

US president Donald Trump fired the top US official responsible for overseeing election security, claiming without evidence that he made “highly inaccurate” assertions about the safety of the presidential election.

Chris Krebs, the head of the Cybersecurity and Infrastructure Security Agency, was dismissed by the president via Twitter. It follows a statement last week by the agency that the 2020 election was the most secure in history.

Announcing the decision, Mr Trump wrote: “the recent statement by Chris Krebs on the security of the 2020 Election was highly inaccurate, in that there were massive improprieties and fraud – including dead people voting, Poll Watchers not allowed into polling locations, “glitches” in the voting machines which changed votes from Trump to Biden, late voting, and many more.”

He continued: “Therefore, effective immediately, Chris Krebs has been terminated as director of the Cybersecurity and Infrastructure Security Agency.”

The agency, which is part of the Department of Homeland Security, issued a statement last week asserting that the November 3rd election was “the most secure in American history.” It added: “While we know there are many unfounded claims and opportunities for misinformation about the process of our elections, we can assure you we have the utmost confidence in the security and integrity of our elections.”

...votes from Trump to Biden, late voting, and many more. Therefore, effective immediately, Chris Krebs has been terminated as Director of the Cybersecurity and Infrastructure Security Agency.

Mr Trump continued to post unsubstantiated allegations about voting irregularities in states like Georgia, Michigan, Nevada and Pennsylvania via his Twitter feed on Wednesday as he refused to accept the outcome of the election. The Trump campaign also officially sought a partial recount in Wisconsin, focusing on two counties in a move that will cost the campaign $3 million.

In Michigan, two Republican members of the board in the state’s most populous county signed-off on the election results after first refusing to do so, after they faced a local backlash and accusations of racism for casting doubt on the results in the black-majority district. Throughout the country, states are preparing to certify their results, before officially reporting them on December 14th when the college of electors meet.

The president’s lawyer Rudy Giuliani, who has been representing the Trump campaign in several court cases across the country, has also propagated baseless theories about voting machines used in the election. He has claimed that the Dominion voting system used in many districts has connections with billionaire George Soros and the leaders of Venezuela.

Another conspiracy theory involving a software company, Scytl, is also making an impact on conservative channels.

Meanwhile, president-elect Joe Biden met frontline workers at a virtual session in Delaware yesterday as he set out his priorities in tackling the coronavirus. Among those who participated was a nurse in Wisconsin who said she has not been tested for coronavirus despite treating Covid-19 patients since February.

Mr Biden criticised the General Services Agency – the part of the federal government responsible for allowing the incoming president access to resources and information during the transition – for not giving his team access to Covid-19 information.

“There’s a whole lot of things that we just don’t have available to us – unless it’s made available soon we are going to be behind weeks or months.”

Wednesday’ meeting took place a day after Mr Biden was briefed by outside national security experts on the challenges facing US foreign policy. Among those who participated was former ambassador to the United Nations Samantha Power, Biden campaign adviser Tony Blinken, who is tipped as a possible national security adviser in the next administration, and former State Department official and Harvard professor, Nicholas Burns.