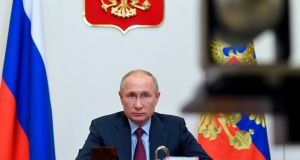 Russian president Vladimir Putin: ‘In general, the situation in the country is not easy but it’s under control. In some regions the situation is, quite frankly, difficult.’ Photograph: Alexei Nikolsky/Sputnik/Kremlin Pool/AP

President Vladimir Putin has ordered Russian officials to address issues ranging from a shortage of ambulances to funding for medicines to hospital phone lines that are constantly engaged, as the coronavirus pandemic puts the country’s health system under severe strain.

Russia reported a record daily high of 456 Covid 19-related deaths on Wednesday and 20,985 new infections. It has now registered more than 1.9 million cases, the fifth highest total in the world.

“In general, the situation in the country is not easy but it’s under control. In some regions the situation is, quite frankly, difficult . . . and the most alarming thing is the rising death rate,” Mr Putin told government officials during a video-conference.

“The task of all regional leaders is to persistently, on a daily, hourly basis . . . solve problems that arise and keep an eye on all areas of the fight against the epidemic, as well as key issues in the work of healthcare institutions,” he added.

Officials told Mr Putin that about 81 per cent of Russia’s 268,000 designated Covid-19 hospital beds were now occupied, and in 10 of the country’s 85 regions more than 90 per cent of those beds were already being used.

Finance minister Anton Siluanov said Russia’s 2021 budget would be tapped this year to tackle a national shortfall of some 2,700 ambulances, amid reports of coronavirus sufferers waiting many hours to be transferred to hospital.

Mr Putin went on to address accounts of people having interminable problems trying to call clinics and medical helplines: “People can’t get through. I ask you to deal with this personally,” he told deputy prime minister Dmitry Chernyshenko.

He also urged officials to speed up standard coronavirus testing procedures and to prevent any shortages of medicines, amid reports of some hospitals running out of key supplies including oxygen.

Mr Putin said it was “unacceptable” that the “colossal efforts” of medics should be undermined by “administrative carelessness and the failure to work efficiently and smoothly in the regions to provide them with everything they need.”

“Personal responsibility for measures taken, I hope, at the right time – or not taken – has not been removed,” he warned officials. “And of course no one should try to dress up the situation . . . and make it seem like everything is fine. No one here in the centre, or in the regions, needs pleasant reports or for things to be hushed up.”

The Kremlin has told regional leaders to choose which measures to impose to fight coronavirus, while also urging them to keep the economy moving as freely as possible.

Only one region, Buryatia in Siberia, has gone as far as imposing a partial lockdown and closing bars, restaurants and most shops for a fortnight.

Anna Popova, Russia’s top public health official, said this week that a mutated form of coronavirus had been discovered in Siberia, but it did not appear to be more deadly or contagious than the main strain.

She also announced that Russia had launched trials of a second Covid-19 vaccine, called EpiVacCorona; like Russia’s Sputnik V vaccine, it was registered by national regulators in advance of large-scale clinical trials.