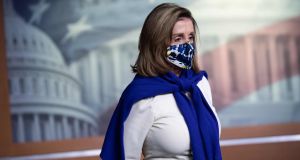 US Speaker of the House Nancy Pelosi brushed off questions as to whether the next term would be her last in the role. Photograph: Saul Loeb/AFP via Getty Images

Democrat Nancy Pelosi was nominated by her party for a fourth term as Speaker of the House of Representatives on Wednesday, despite Democrats’ disappointing performance in this month’s elections.

At a virtual meeting of Democratic members of the House of Representatives, Ms Pelosi was re-elected as speaker, while veteran congressman Steny Hoyer was reappointed as the House majority leader. In a new addition to the leadership, Massachusetts congresswoman Katherine Clark was elected as the number four Democrat in the House. Further party roles will be filled on Thursday. While Ms Pelosi received the backing of her party, the full House of Representatives will vote on her nomination in early January when the next US Congress meets for the first time.

While election contests are still outstanding in New York, Iowa and California, Democrats are poised to see their 35-seat House majority significantly reduced in the next congress. This is despite the fact that Ms Pelosi predicted the party would expand its majority in an election-day press conference. Instead, Democrats lost seats in Florida and California and failed to win seats in states such as Texas and Ohio as hoped.

Speaking after the remote vote on Wednesday, Ms Pelosi said there was a “tremendous amount of unity” within her caucus and that the focus was now on the future. “One thing that we all agree on . . . is that elections are about the future . . . Our caucus is unified in that respect, looking to the future for American working families,” she said.

Asked about the losses in the House, Ms Pelosi emphasised the significance of having a new Democratic president. “Having the majority, holding the House and winning the White House is an opportunity for us to work together with the president,” she said. “A Democratic president . . . has a unifying impact as well, especially when he is a unifier like Joe Biden. ”

Ms Pelosi also brushed off questions as to whether the next term would be her final as Speaker, but she suggested she is likely to stand by a commitment made in 2018 to step aside after the next term.

The Californian turns 81 next March, while Mr Hoyer is also 81. The congressman from Maryland urged the Republican-controlled senate to work with Democrats to pass a Covid-19 relief bill, expressing optimism that legislation could be agreed next month.

“We need to get work done for the American people,” he said.

Meanwhile, senate minority leader Chuck Schumer has been fielding calls from frustrated Democratic senators after the party failed to win a handful of seats which were believed to have been in reach. Democrat candidates in Maine, North Carolina, Iowa and elsewhere, lost to incumbent Republicans on November 3rd, and control of the senate now rests on two run-off elections in Georgia on January 5th.

Mr Schumer formally invited Republicans for talks on a new Covid-19 relief package on Wednesday. “Our colleagues face a simple choice. They put the election behind them and work across the aisle to get something done, or they can remain in their partisan corner.” But senate majority leader Mitch McConnell has blamed Democrats for not compromising. Republicans have baulked at the price tag of the $2.2 trillion (€1.85tn) coronavirus package passed by the House in October.