‘We were glued to it’: John King’s Irish cousin on CNN’s magic election wall 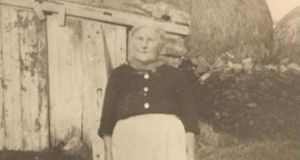 An Irish relative of CNN TV anchor John King says her family was “glued” to his US election coverage and plans to show him around their Connemara ancestral home on his first visit.

Describing the Boston-born broadcaster as her “most famous cousin,” Jacqueline Kenny said that it was King’s knowledge of the US election map and his “delivery” of information on the count at his “magic wall” interactive election map that “went down so well with people”

“He was so calm. He wasn’t just relaying information – he wanted people to stay calm and let the process work. I think he did a great job. I have told him many times since this all broke,” said Kenny who shares family roots with King back to Doonloughan near Ballyconneely, Co Galway.

“We are really proud of him.”

King sparked a flurry of social media interest among Irish election watchers hooked on CNN’s marathon coverage of the election count when he responded to Lisa McGee, creator of hit comedy Derry Girls who asked whether he was Irish yet.

The broadcast journalist told The Irish Times that the excitement over him and his magic wall among Irish viewers was “very kind and flattering.”

“But what it is most of all is proof the world has high interest in the constant turmoil of Trump, and America’s choice about what it wants to be as a nation and where it chooses to stand in the world. I just happen to have a remarkable tool to help walk through the chaos,” he said.

“But the big win is the reminder I am so long overdue to walk the streets of my roots - and check in to make certain the beer is still good.”

Kenny said she has known her cousin was a well-known journalist for “years and years.”

“We have obviously seen him use the magic wall in previous elections. He might not have been widely known on this side of the water,” she said.

The rest of the country were unaware of his Irish roots until he was asked for more on his Irish story by a Twitter user over the weekend.

He posted a cryptic tweet: “It begins in Doonloughan, and a visit is long overdue.”

Kenny said King’s great-grandmother – and her great-great grandmother – who lived in Doonloughan was Kate Little King.

She was one of 24 children and had 10 children of her own, including King’s grandfather Christy, or “Festy” as he was known at home in Connemara before emigrating to Boston in 1911.

King, who grew up in the Boston neighbourhood of Dorchester said that he has “faint but fond memories” of visiting his grandfather in his retirement home and of his Irish scally cap.

Kenny paints Kate, John’s grandfather’s mother, as a formidable woman who, at 78, took in her grandmother and her two siblings at the family home in Doonloughan after her mother’s sudden death in Boston.

Kate, or “Granny King” as Kenny knows of her, was born shortly after the Famine in the late 1850s and lived to be 98. She was widowed by her early 50s.

Kenny says that the family left Connemara and emigrated to the United States, to Boston and other parts of the US. Cousins return most years to trace their roots in Doonloughan, she said.

She has become the family’s historian digging into their past.

The transatlantic connections between famous US figures in politics and media and their Irish relatives is “great for Ireland. ”

“It is important that we remember who we are. My grandmother and Granny King went through a lot. They achieved a lot. I don’t want it forgotten,” she said.

Asked what she wants to show King most of all when he visits their ancestral home in Connemara, she said: “The beauty of Doonloughan. It has the best beaches in Ireland.”

There will be a pint for him at Keogh’s pub in nearby Ballyconneely, she said.