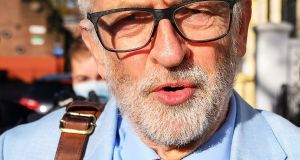 Labour leftwingers have reacted angrily to Keir Starmer’s decision not to restore the whip to Jeremy Corbyn, accusing the leader of endangering party unity.

Mr Corbyn was reinstated as a Labour member on Tuesday after a 19-day suspension for suggesting that the scale of anti-Semitism in the party had been “dramatically overstated for political reasons by our opponents”.

Mr Corbyn’s statement in response to a damning report by the Equality and Human Rights Commission (EHCR) on anti-Semitism within Labour led to his immediate suspension as a member. A panel drawn from the party’s ruling National Executive Committee (NEC) restored his membership after he made a subsequent statement clarifying that he had not intended to suggest that the problem of anti-Semitism in the party had been overstated.

“To be clear, concerns about anti-Semitism are neither ‘exaggerated’ nor ‘overstated’,” he wrote.

“I regret the pain this issue has caused the Jewish community and would wish to do nothing that would exacerbate or prolong it.”

But Sir Keir said on Wednesday morning that his predecessor could not sit as a Labour MP because his actions had “undermined and set back our work in restoring trust and confidence in the Labour party’s ability to tackle anti-Semitism”. He said he would keep the decision to remove the party whip from Mr Corbyn under review.

“Since I was elected Labour leader, I have made it my mission to root out anti-Semitism from the Labour Party.  I know that I will judged on my actions, not my words,” he said.

“It is the task of my leadership to fix what I have inherited. That is what I am resolute in doing.”

Almost 30 leftwing MPs from the Socialist Campaign Group called on him to reverse a decision that Len McCluskey, leader of the Unite union, described as vengeful.

“The continued persecution of Jeremy Corbyn, a politician who inspired millions, by a leadership capitulating to external pressure on party procedures risks destroying the unity and integrity of the party,” Mr McCluskey said.

MPs who lose the party whip are classified as Independents and are not allowed to stand as candidates for their party in an election unless the whip is restored.

“We always knew tackling the cultural problems allowing anti-Semitism to exist in Labour would take time,” he said. “We knew there would be moments that challenge and test us. The last 24 hours were unnecessarily difficult but Keir Starmer has acted authoritatively. We are moving forward.”

A snap poll by YouGov on Wednesday evening found Labour voters split over the decision to remove the whip from Mr Corbyn, with 38 per cent saying it was right, 32 per cent that it was wrong and 29 per cent not sure. Among all adults, 50 per cent thought Sir Keir had done the right thing, compared to 21 per cent who thought he was wrong.