Noel Whelan: Trump not coming to Ireland is for the better 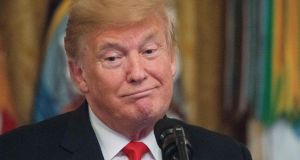 US president Donald Trump: We can now avoid the need for the Irish president to receive him. Photograph: Nicholas Kamm/AFP/Getty Images

The sigh of relief was almost audible in Government and official circles as word came on Tuesday that a proposed visit by Donald Trump in November has been postponed. After having their traditional August break interrupted by the need to plan and execute a safe and successful papal visit, the last thing Ireland’s top bureaucrats and securicrats needed was to have to do it all again for a unpopular US president.

Since the proposed visit had been hastily announced a week previously, efforts were afoot on the Irish side to confine Trump to the mid-west. The plans being worked on would have had Air Force One land at Shannon Airport, the US president staying at his own Doonbeg golf estate in county Clare. The idea was that Taoiseach Leo Varadkar would have travelled down to somewhere like Dromoland for a formal head of government meeting.

Steering the White House away from the notion of Trump visiting Dublin had become a priority in seeking to minimise the security operation and reduce both the financial and political costs of the visit.

It would also probably have avoided the need for the President to be involved in receiving Trump. Difficulties were likely to have arisen on that front anyhow because the visit was scheduled to take place just before or after the presidential inauguration which is fixed for November 11th.

Apart from this effort to keep Dublin off the schedule, the Government would of course have extended all necessary and appropriate diplomatic welcomes to the US president. Although not liked by most people in Ireland, Trump is the democratically elected leader of our largest international ally. The United States is home to millions of people of Irish descent. The value of the trade relationship between our two counties is now at a value approaching one trillion dollars.

The fact that Ireland is still honoured every St Patrick’s Day with a special “Shamrock Ceremony” in the Oval Office, a party in the West Wing and a cross-party lunch on Capital Hill is extraordinary. These are incredible diplomatic and marketing opportunities for a small nation. They serve to enforce Ireland’s elevated prominence in the US diplomatic pecking order. It would have been rude of Leo Varadkar when he availed of these events last March not to have reciprocated by inviting Trump to visit Ireland.

Niall O’Dowd made the point here last Monday that Trump’s decision to visit Ireland was shaped by his desire to court the Irish-American vote for his re-election. It was ever thus. That is why John F Kennedy came in 1963, why President Bill Clinton visited several times as President and why Barack Obama like Ronald Regan before him was so anxious to acknowledge the Irish dimension to his roots.

Each of these previous presidential visits are memorable for the large crowds who gathered at various public locations in Ireland to hear the US president speak.

The only reason large crowds would have gathered in response to the Trump visit is to protest. There is every likelihood, that even if Trump himself had been confined to the mid-west there would have been very large rallies protesting against him and against his policies in the capital and in other cities. It is difficult, of course, to assess how large these protests would have been but the size of the crowds against Trump would have been at least as large as the crowds who gathered in Dublin to welcome Obama in May 2011.

One observer recently returned after a long spell out of Ireland wondered to me this week why the Irish care so much about the US presidency one way or the other. He accepted that inevitably as the leader of the world’s largest western democracy the occupant of the White House enjoys the highest-profile internationally, and Trump’s profile is even larger again but in Ireland he felt the prominence of the US president in our thoughts was disproportionate.

The only explanation I could posit was that since the early 1960s the Irish have had an at-times surreally warm relationship with the US presidency, at least when occupied by a Democrat. The commemoration of Kennedy’s visit endures in New Ross and elsewhere 55 years later; the Clinton visits are still warmly recalled in Derry and other places not least because of his significant contribution to the peace process. The Obama link is also marked in Moneygall albeit most prominently and tackily by naming a motorway service station after him.

On many occasions since the 1960s, the Irish have been able to point to the US president as someone their children should admire and respect. That sense was recharged during the Obama presidency. We cannot do that with Donald Trump in the office. We remain fond of the US but there is little to respect in either Trump’s policies or personality.

1 People often ask me why I never want to go back to Ireland
2 Dublin stabbing: Parking space was at centre of previous rows, gardaí told
3 Soreness is good, scales are pointless: The 10 biggest myths in fitness
4 Miriam Lord: Lady Lou crowned The People’s Taoiseach at Liberty Hall
5 Gordon D’Arcy: Change was advisable before Twickenham; now it is inescapable
Real news has value SUBSCRIBE