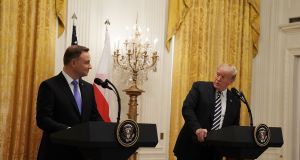 US president Donald Trump waded into the sexual assault controversy surrounding Brett Kavanaugh’s nomination on Tuesday, expressing sympathy with the man he nominated to the supreme court but failing to mention his accuser. “I feel so badly for him that he is going through this, to be honest with you,” Mr Trump said during a joint press conference at the White House with Poland’s president. “This is not a man who deserves this.”

Mr Trump did not mention Christine Blasey Ford, the woman who has accused Mr Kavanaugh of sexual assault when both were teenagers, though the president said: “Hopefully, the woman will come forward and state her case. He will state his case, before the United States senate.”

The accusations, which Mr Kavanaugh denies, have threatened to derail his confirmation as a Supreme Court justice which had been expected to be endorsed in the coming weeks.

Mr Trump’s comments were delivered against a background of mounting uncertainty as to whether a planned emergency senate hearing next Monday would in fact take place.

The Senate Judiciary Committee announced it was calling Mr Kavanaugh and Ms Blasey Ford to testify publicly next Monday but so far Ms Blasey Ford has not agreed to testify according to senator Chuck Grassley. “So it kind of raises the question: Do they want to come to the public hearing or not?” he said.

Among suggestions emanating from Capitol Hill as Republican senators grappled with a growing crisis was that Ms Blasey Ford could testify privately.

The allegations of sexual assault against Mr Kavanaugh have thrown his confirmation process into disarray. As the controversy continued to grip Washington, John Cornyn the second most senior Republican member on the senate judiciary committee appeared to question the accuser’s credibility, saying there were “gaps” in her account. “The problem is, Dr Ford can’t remember when it was, where it was, or how it came to be,” he said.

Senate Democrats renewed their attacks on Mr Kavanaugh on Tuesday, calling on the FBI to reopen background checks on the judicial nominee in light of the allegations. But Mr Trump appeared to reject the idea.

“I don’t think the FBI really should be involved because they don’t want to be involved,” he said, though he added: “If they wanted to be, I would certainly do that. But as you know, they say this is not really their thing.”

Democrats also clashed with Republicans about the scope of any hearing, with some arguing that Mark Judge, a friend of Mr Kavanaugh whom his accuser claims was in the room where the alleged assault took place, should be questioned.

In an opinion piece in the New York Times, Anita Hill, the woman at the centre of a similar controversy 27 years ago when she accused supreme court nominee Clarence Thomas of sexual harassment, said that the Senate Judiciary Committee now had the chance to “do better”.

Ms Hill, now a professor at Brandeis University, testified before the committee in October 1991 and was subjected to relentless questioning, but Mr Thomas was ultimately endorsed by the Senate.

“In 1991, the Senate Judiciary Committee had an opportunity to demonstrate its appreciation for both the seriousness of sexual harassment claims and the need for public confidence in the character of a nominee to the Supreme Court. It failed on both counts,” Ms Hill wrote.

“There is no way to redo 1991, but there are ways to do better . . . the 2018 Senate Judiciary Committee must demonstrate a clear understanding that sexual violence is a social reality to which elected representatives must respond.”