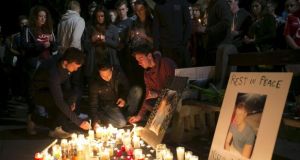 Men place candles during a candlelight vigil for the victims of the Berkeley balcony collapse in Berkeley, California in 2015. Photograph: Reuters

California has signed a Bill into law requiring the waterproofing of apartment balconies to be regularly inspected in response to the 2015 tragedy in Berkeley that killed six Irish students.

Democratic governor Jerry Brown signed legislation on Monday compelling inspectors to check the waterproofing on decks and balconies of all buildings with three or more multi-family units by January 2025.

Under the new law, that standardises balcony inspections at apartment buildings, external decks and balconies must be inspected every six years thereafter.

Five Dublin students on J-1 summer visas and an Irish-American student from Rohnert Park, California, were killed on June 16th, 2015, when the fifth-floor balcony they were standing on collapsed.

Investigators found that the balcony had poorly sealed waterproofing and had become infested with dry rot, weakening the structure. The builder was found to have a history of lawsuits relating to construction defects.

No criminal charges were ever brought over the tragedy. Civil lawsuits brought by the families of the deceased and the surviving students were settled and substantial damages were paid out.

California state senator Jerry Hill, who sponsored the Bill, said he was “deeply grateful” to Jackie Donohoe, Ashley’s mother, for lobbying intensively for the Bill and attending every legislative hearing about the measures.

She “made it her mission to prevent others from enduring the shattering grief that struck the families of those who died or were injured when the balcony in Berkeley collapsed”, said Mr Hill.

Department of Foreign Affairs official Philip Grant, Ireland’s consul general in San Francisco at the time of the tragedy, has asked California’s legislature to continue pushing for other related measures to be passed.

“While the new law marks a major shift in how California will regulate and monitor its building safety code, it doesn’t go as far as it might (for example, to include non-residential, public-use buildings),” he said in a Facebook posting.

“And we want to see these other structures/buildings included in future reviews of the law. Also, similar measures are badly needed across the US and here in Ireland as well.”