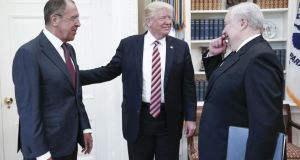 US president Donald Trump has defied calls to appoint a special counsel to investigate Russian interference in the presidential election, as fresh reports emerged on Wednesday night that FBI chief James Comey sought extra resources for his investigation just days before he was fired.

Protests took place outside the White House on Wednesday over Mr Trump’s decision to fire the FBI chief who was leading a probe into links between the Trump campaign team and the Kremlin.

The White House on Tuesday rejected suggestions that Mr Trump’s decision to dismiss Mr Comey had anything to do with the ongoing probe into the Trump campaign team’s links with Russia.

Instead, the administration has argued that it was linked to Mr Comey’s mishandling of the Hillary Clinton email controversy.

“Very simple. He was not doing a good job,” Mr Trump told reporters when questioned about Mr Comey’s dismissal as he sat alongside Henry Kissinger, who served as Richard Nixon’s secretary of state, at a surprise meeting at the White House.

The reports that Mr Comey sought extra resources for the FBI investigation into links between the Trump campaign team and the Kremlin days before he was fired have intensified allegations of a political cover-up by the White House.

Democratic senator Richard Durbin, one of several members of Congress briefed by Mr Comey in recent days, confirmed that Mr Comey made the appeal for more resources directly to deputy attorney general Rod Rosenstein, the justice official who wrote the memo calling for Mr Comey’s dismissal.

As the White House battled one of the biggest crises of the Trump presidency, the US president hosted Russian foreign minister Sergei Lavrov in the Oval Office, the first meeting between the president and a senior member of the Russian government since he assumed office.

A smiling Mr Trump was photographed alongside the Russian foreign minister and Sergey Kislyak, the Russian ambassador who was revealed to have had undisclosed contacts with both former national security adviser Mike Flynn and attorney general Jeff Sessions, leading to the former’s dismissal.

Mr Lavrov, who earlier appeared to joke about Mr Comey’s dismissal ahead of a meeting with his American counterpart Rex Tillerson, said the Comey issue had not been discussed during his meeting with Mr Trump.

Instead the ongoing conflict in Syria, and the possibility of establishing safe zones within the war-torn country where Washington and Moscow are backing opposite sides, was the main topic of discussion he said.

There was some reprieve for Mr Trump, however, as senate majority leader Mitch Mc Connell and other senior Republicans appeared to rule out the appointment of a special counsel to investigate the matter.