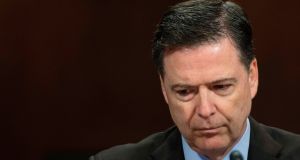 The White House has argued the sacking of FBI director James Comey is linked to his mishandling of the Hillary Clinton email controversy. File photograph: Jim Watson/AFP/Getty Images

FBI chief James Comey sought extra resources for his investigation into links between the Trump campaign team and the Kremlin days before he was fired, senior Congressional sources confirmed, as the repercussions from President Donald Trump’s shock decision to fire Mr Comey continued to reverberate on Wednesday.

As protests took place outside the White House over Mr Trump’s decision to fire the FBI chief, who was leading an inquiry into links between the Trump campaign team and the Kremlin, the White House rejected suggestions that the decision to dismiss Mr Comey had anything to do with the Russian investigation.

Instead, the administration has argued the sacking is linked to Comey’s mishandling of the Hillary Clinton email controversy.

“Very simple. He was not doing a good job,” Mr Trump told reporters when questioned about Mr Comey’s dismissal as he sat alongside Henry Kissinger - who served as Richard Nixon’s secretary of state - at a surprise meeting at the White House.

As the Trump administration faced accusation of a cover-up from Democrats, Mr Trump hosted Russian foreign minister Sergei Lavrov in the Oval Office, the first meeting between the president and a senior member of the Russian government since he assumed office.

Mr Lavrov, who earlier appeared to joke about Mr Comey’s dismissal ahead of a meeting with his US counterpart Rex Tillerson, said the Comey issue had not been discussed during his meeting with Mr Trump.

Instead, the ongoing conflict in Syria, and the possibility of establishing safe zones within the war-torn country where Washington and Moscow are backing opposite sides, was the main topic of discussion, he said.

Reports that Mr Comey had sought extra resources for the FBI investigation into links between the Trump campaign team and the Kremlin days before he was fired has increased pressure on the White House following the shock sacking.

Democratic senator Richard Durbin, one of the many members of Congress briefed by Mr Comey in recent days, confirmed the latter made the appeal directly to deputy attorney general Rod Rosenstein, the justice official who wrote the memo calling for Mr Comey’s dismissal.

Mr Rosenstein is overseeing the Russian investigation after Mr Trump’s attorney general Jeff Sessions was forced to recuse himself from any Russian inquiries after failing to disclose meetings with the Russian ambassador to the US.

Meanwhile, senior Republican Mitch McConnell rejected calls by Democrats for a special counsel to be appointed to investigate Russian interference in last year’s US election, taking the heat off Mr Trump, who is facing accusations of a cover-up.

Despite a number of Republicans publicly criticising Mr Trump’s move to dismiss the FBI chief in the hours following the announcement, the GOP party mainly backed the president on Wednesday.

“Today we’ll no doubt hear calls for a new investigation, which could only serve to impede the current work being done,” the most senior Republican in the Senate said on the chamber floor.

He was backed by prominent Republican Lindsey Graham, while Richard Burr, head of the Senate Intelligence Committee, rowed back slightly on earlier criticism, stating Mr Comey’s dismissal, while “troubling”, would not impede the work of the committee.

With Republicans controlling both Houses of Congress, Republican support is necessary to appoint a special prosecutor.

Democrats have been virtually unanimous in their call for a special prosecutor to be appointed to investigate Russian interference in the US election and alleged links between the Trump election campaign team and the Kremlin.

With attention now turning to the issue of who will be Mr Comey’s successor as head of the FBI, the White House said the “first step” in choosing a replacement was under way.

“There are several individuals being considered and the first step will be selecting the interim director... as of today, the department of justice is handling the first step,” said deputy press secretary Sarah Huckabee Sanders at the White House press briefing.

She said Mr Trump had been considering firing Mr Comey since he took office, noting there had been an “erosion of confidence” in him.

“I think that director Comey has shown in the last several months and the last year a lot of missteps and mistakes ... frankly I think it’s startling that Democrats aren’t celebrating this.”

She said Mr Trump was due to meet acting FBI director Andrew McCabe on Wednesday and may visit the bureau’s headquarters, noting that morale was low in the organisation.

Mr Comey, who learned of his dismissal through a TV report while he was speaking at an FBI event in Los Angeles on Tuesday, has not yet publicly commented on developments that have seen him lose his job just three years into a ten-year term.

While the Senate Intelligence Committee has invited Mr Comey to testify in a closed session next Tuesday, it is not clear whether he will participate.

Mr Trump took to twitter on Wednesday morning to chastise individual Democrats for their stance on the Comey dismissal.

“Cryin’ Chuck Schumer stated recently, ‘I do not have confidence in him (James Comey) any longer.’ Then acts so indignant. #draintheswamp,” he tweeted, referring to senate minority leader Chuck Schumer - who lambasted Mr Trump on Tuesday evening for dismissing Mr Comey.