Fintan O’Toole: Trump’s firing of FBI boss reveals the method in his madness 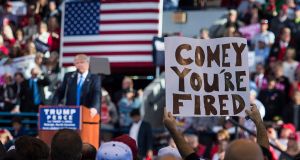 What do you do if you’re a reality TV star and your show is flagging?

Easy: you generate conflict. Get people up in arms, keep them talking about you.

So what if some of them are apoplectic? – apoplectic is good. But what if you’ve already started lots of fires and they’re spluttering out? You do what everyone in Hollywood or TV land does when things are not going well – you revive an old idea that worked before. If it grabbed the ratings last time, why not roll it out again? This is what Donald Trump has done with the dramatic sacking of the FBI director James Comey. He is trying to keep his fans happy by reviving his catchphrase from the Apprentice: “You’re fired!”

To suggest that there is some method in Trump’s madness is not to deny that the firing of Comey is indeed mad. The chaotic implementation of the move - with Comey learning of his sacking from breaking news stories on TV and Trump’s surrogates utterly unprepared for the task of defending his latest outrage - suggests that it was largely impulsive. The impulse in question is the narcissist’s rage that the world is refusing to conform to his desires.

Politico magazine reported on the atmosphere leading up to the sacking and Trump’s fury that the various investigations into links between his presidential campaign and Russia did not go away simply because he wanted them to: “He had grown enraged by the Russia investigation, two advisers said, frustrated by his inability to control the mushrooming narrative around Russia. He repeatedly asked aides why the Russia investigation wouldn’t disappear and demanded they speak out for him. He would sometimes scream at television clips about the probe, one adviser said.”

Delusional rage is not generally a good starting point for high-level political strategy.

But we have to remember that Trump’s logic is not the logic of normal politics. He has little interest in actually running a country - he has systematically handed that task over to the oligarchic and corporate interests to which he has ceded control of economic, environmental, social and healthcare policy. He also has little interest in winning over the people who didn’t vote for him or the liberal nexus that despises him. He is running a show and the primary imperative is to keep the show’s diehard fans happy and engaged.

And the essence of the Trump show is the display of disruption. One of the oddities of current political discourse in the US is that there is still an Establishment illusion that Trump might settle down and become a normal president. Critics quite rightly complain about the normalisation of the outrageous under Trump, the way vicious sexism, xenophobia, and flagrant lying have come to be taken for granted. But the reality is that much respectable opinion would be happy enough to make its peace with Trump if he concentrated on the important job of making the superrich richer and behaved with a little more decorum.

In this, they’re missing the point.

Trump’s madness is not an unfortunate departure from that serious business. It is central to getting it done. How, for example, do you take health care away from 24 million people, especially when so many of those who will suffer in the “reform” of Obamacare that the House Republicans passed last week are classic Trump voters - older, more rural, unhealthier?

This “reform” is a naked transfer of wealth from the poor to the very rich. It has to be clothed. And what Trump instinctively understands if that for the people who have to be distracted from cruel realities, the clothing that will cover this nakedness has to be pretty garish.

This is where Trump’s madness and his method overlap.

The madness comes from Trump’s childish need for instant gratification. The method is the appeal to people who are also used to being fed instantly gratifying sensation. Trump’s problem in the early days of his presidency is precisely that the gratification has not been instant - for him or for his fans. He has openly admitted that he thought everything would be simpler, that he could just issue orders and the world would change. And in his own boredom and frustration, he can sense the danger of the same qualities seeping into his fan base.

He promised instant drama - millions of illegal migrants rounded up on day one; Muslims banned from entering the US; the big beautiful wall rising on the Rio Grande. Reality has been very slow to comply with his orders. He and his fans needed a sugar rush, an intoxicating hit, an instant high.

Trump’s instinctive gamble has always been that his fans would be happy to live vicariously through him. His self-gratification gratifies their own desires. He is for them a kind of wish-fulfillment, a figure of untrammeled power who doesn’t have to abide by rules, who can grope anyone he wants and fire anyone he wants.

It’s an absurd gamble but of course it paid off with the presidency of the US. It ceases to pay off, however, the moment he begins to look like a man who acknowledges ordinary limits and common laws.

Decorum would destroy him.

There may be many reasons why Trump fired Comey but two of them loom largest: he wanted to and he could.

He is entirely incapable of doing his job, but it happens to be a job that allows him to fire missiles and fire people.

For as long as he survives, he will never be able to resist the gesture for which his fans learned to adore him: pointing his stubby finger and saying “You’re fired!”