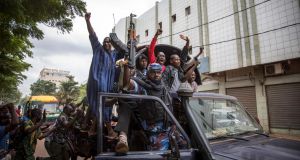 Malians climb onto a police vehicle and cheer as it drives through the streets of Bamako on Wednesday. Photograph: H Diakite/EPA

The soldiers who ousted Malian president Ibrahim Boubacar Keita have said they plan to set up a transitional government and hold elections in the west African country that is a key western ally in the fight against jihadism in the Sahel.

Mr Keita, widely known as IBK, had been the target of weeks of mass street protests against what critics say has been seven years of corrupt and inept rule, before a group of soldiers detained him and other senior government and military officials on Tuesday.

“If elements of the army felt compelled to intervene to bring an end to this – do I really have a choice?” Mr Keita said in a nationally televised address announcing the dissolution of parliament and his government hours after mutineering soldiers arrested him at gunpoint. “I don’t want a single drop of blood to be shed to keep me in power.”

In the wake of Mr Keita’s resignation, soldiers clad in military fatigues and calling themselves the National Committee for the Salvation of the People addressed the country.

“We are not holding on to power, but we are holding on to the stability of the country,” said Ismael Wague, the deputy chief of staff of the air force. “This will allow us to organise within an agreed reasonable timeframe, general elections to equip Mali with strong institutions, which are able to better manage our everyday lives and restore confidence between the government and the governed.”

The African Union condemned the soldiers’ actions, as did western allies France, US and the UN. The UN Security Council said it would hold an emergency meeting on Wednesday. West African regional bloc Ecowas announced sanctions that include suspending trade and closing borders to Mali.

On Tuesday, before Mr Keita’s resignation, Mali’s main opposition group M5-RPF suggested to Reuters that it supported the mutiny, which spurred hundreds of people to gather in central Bamako to celebrate. It remains unclear what role Mahmoud Dicko, the Salafist imam who leads the M5-RPF coalition – which has organised weeks of mass protests calling for Mr Keita’s resignation – will play in any transition.

Tuesday’s mutiny echoed a 2012 coup that also began at Kati military base outside Bamako and ended with the resignation of then president Amadou Toumani Touré.

François Conradie, senior political economist at NKC African Economics, pointed out that it took 16 months before Mr Keita was elected following that coup, during which time jihadis captured northern Mali, prompting a French intervention that continues today with 5,000 troops on the ground in the region.

“In the short term, there is no reason to expect an improvement in the security situation – to the contrary, the jihadist networks in the north of the country will see a gap to extend their influence while the situation in Bamako is uncertain and the French do not have a civilian interlocutor,” he said in a research note.

One driving factor in public frustration with Mr Keita’s government has been its failure to contain spiralling violence in central and northern Mali that has spread across the region, killing thousands and displacing millions.

France, the former colonial power, has been leading the effort to beat back a diffuse network of extremist groups that have joined forces with various ethnic militias to slaughter soldiers and civilians alike.

Arnaud Danjean, a French member of the European Parliament, wondered how a coup was possible given the daily interaction the EU, UN and France have with Mali’s military, whom they advise, train, equip and support. “That a military coup could happen speaks volumes about the inadequacy in Mali, and not just the local power!” he wrote on Twitter.

There is a “mish-mash” of French and European-backed alliances and institutions operating in the Sahel to prop up governments and combat terrorism, said François Heisbourg, special adviser at the Fondation pour la Recherche Stratégique, a French think-tank.

“You’ve managed to put in place a rather extraordinary layer cake of initiatives the sum of which is substantially smaller than each of the individual parts,” said Mr Heisbourg, who has previously compared the situation in the Sahel to the war in Afghanistan.

Despite criticism among western diplomats for his inept administration, Mr Keita has been a key ally, supportive of the French intervention even as public mood has at times turned against it.

The military junta “was quick to express readiness to work with France, so I don’t think France’s efforts are jeopardised but it will be a challenge”, wrote Arthur Boutellis, senior adviser at the International Peace Institute.

“Much may depend on how the relationship between the military junta and M5/Dicko develops as well because it is conceivable that the civilian rule that will emerge post-IBK is much less favourable to France’s continued presence,” he added. – Copyright The Financial Times Limited 2020