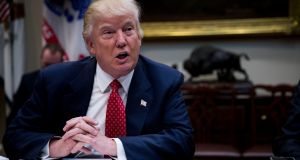 US President Donald Trump gave a speech attacking the media as ‘fake news’ and the ‘enemy of the people’. Photograph: Doug Mills/The New York Times

The White House barred several news organisations from an off-camera press briefing on Friday, handpicking a select group of reporters that included a number of conservative outlets friendly toward Donald Trump.

The “gaggle” with Sean Spicer, the White House press secretary, took place in lieu of his daily briefing and was originally scheduled as an on-camera event.

But the White House press office announced later in the day that the Q&A session would take place off camera before only an “expanded pool” of journalists, and in Spicer’s West Wing office as opposed to the James S Brady press briefing room where it is typically held.

Outlets seeking to gain entry whose requests were denied included the Guardian, the New York Times, Politico, CNN, BuzzFeed, the BBC, the Daily Mail and others. Conservative publications such as Breitbart News, the One America News Network and the Washington Times were allowed into the meeting, as well as TV networks CBS, NBC, Fox and ABC. The Associated Press and Time were invited but boycotted the briefing.

The decision to limit access to Spicer, hours after Trump once again declared that much of the media was “the enemy of the American people” while speaking at the annual Conservative Political Action Conference, marked a dramatic shift.

While prior administrations have occasionally held background briefings with smaller groups of reporters, it is highly unusual for the White House to cherry-pick which media outlets can participate in what would have otherwise been the press secretary’s televised daily briefing.

The briefing has become indispensable viewing for journalists trying to interpret the often contradictory statements coming out of the Trump administration, and Spicer’s aggressive handling of the press and delivery of false or misleading statements have already been memorably mocked on NBC’s Saturday Night Live.

‘Gaggles’ - more informal briefings - with the press secretary are traditionally only limited to the pool when they conflict with the president’s travel, in which case they often take place aboard Air Force One. At times, impromptu gaggles form with reporters who spend their days in the White House, but denying outlets wishing to participate is extremely uncommon.

The White House Correspondents Association president, Jeff Mason, said the organisation’s board was “protesting strongly” against the Trump administration’s action.

“We encourage the organizations that were allowed in to share the material with others in the press corps who were not,” Mason said. “The board will be discussing this further with White House staff.”

The executive editor of the New York Times, Dean Baquet, said “nothing like this has ever happened at the White House in our long history of covering multiple administrations of different parties”.

The BBC has sought clarification from the White House on why its representative was denied access. Its Americas bureaux editor, Paul Danahar, added: “Our reporting will remain fair and impartial regardless.”

Stephanie Grisham, a spokeswoman for the White House, said: “Claims that outlets were excluded are not factual.”

In a statement, she added: “The pool was there, so various media mediums were represented.” The pool is a system by which a small group of reporters take turns covering the president and share their reports of his activities with a larger group.

Contrary to Grisham’s statement, outlets who made requests to attend were told this would not be permitted.

When the Guardian asked to participate, pointing to its possession of a “hard pass” that grants daily entry to the White House, an official declined.

“No, unfortunately a hard pass does not necessarily guarantee entry into the gaggle,” Catherine Hicks, a junior White House press aide, emailed in response.

“The gaggle today is just today’s pool with the addition of a few others here at the White House.”

Some outlets lingered in the West Wing hallway out of frustration but were asked by a Secret Service agent, upon instructions from the White House press office, to leave the area.

Earlier on Friday, Mr Trump continued his assault on the press in a speech before the nation’s largest gathering of conservative activists.

He said the press should not be allowed to use anonymous sources, a restriction on free speech he has not suggested before. “You will see stories dry up like you have never seen before,” Mr Trump predicted.

“As you saw throughout the entire campaign, and even now, the fake news doesn’t tell the truth,” Mr Trump said at CPAC.

Mr Trump’s comments came on the heels of revelations that his chief of staff spoke with top officials at the FBI about the bureau’s investigation into potential links between the president’s associates and Russia. The White House lambasted the reports, which appeared in CNN and the Associated Press, but in doing so confirmed the conversations between Reince Priebus, the FBI director, James Comey, and his deputy, Andrew McCabe.

The decision by Trump’s administration to restrict access to the press for Spicer’s briefing prompted at least some seasoned reporters to observe that the White House had successfully changed the topic:

Mr Spicer defended his move in the off-camera gaggle, telling reporters at the private briefing that he was keeping with a promise “to hold sort of gathering [with the press] every day”.

“The president spoke today. As you know we don’t generally do - we haven’t done briefings when the president’s had a major event or an event with a world leader,” Spicer said. Events with world leaders typically include at least a few press questions; Trump’s appearance at CPAC was a speech with no questions.

Mr Spicer added: “We want to make sure we answer your questions, but we don’t need to do everything on camera every day.”