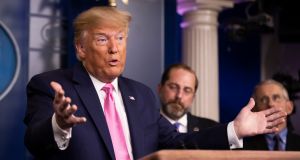 US president Donald Trump: The panic gripping markets is a potential upset for him in this election year. Photograph: Manuel Balce Ceneta/PA

US president Donald Trump was facing mounting pressure from political opponents over his handling of the coronavirus challenge amid allegations that the United States is unprepared for a possible public epidemic.

In an effort to display his control of the deepening crisis, Mr Trump held a press conference late on Wednesday at the White House, announcing the appointment of vice-president Mike Pence to take charge of the issue.

However, on Thursday, Mr Pence appeared to bow to criticism that a medical expert had not been appointed, announcing that he had selected Debbie Birx, an experienced global health specialist, to co-ordinate the White House response.

Mr Trump struck an optimistic note at his press conference – in a rare visit by the president to the White House press room – playing down the potential severity of the virus.

But in an indication of the mixed messaging coming from the administration, Mr Trump appeared to be at odds with senior members of his team. Health and human services secretary Alex Azar and Anne Schuchat, a senior official at the Centre for Disease Control and Prevention (CDC), minutes later warned that the number of cases was expected to grow in the US.

“We do expect more cases,” said Ms Schuchat, a prediction that was also echoed by Mr Azar.

Shortly after the press conference, the first case of an American resident contracting the disease who had not recently travelled to affected countries was reported.

The woman presented herself at a California hospital last week, but personnel at the hospital said they were prevented from testing her for coronavirus because the CDC said she had not travelled to affected countries. In total, there have been 60 reported cases of the virus in the US, including 42 individuals who were repatriated from the Diamond Princess cruise ship in Japan.

As the threat from the coronavirus, which has rapidly spread from China throughout the world, dominated US media coverage on Thursday, a deepening dispute between the White House and Congress over funding to combat the disease was also brewing.

While the White House has demanded $2.5 billion to combat the virus, Senate majority leader Chuck Schumer has argued this figure is insufficient and is calling for $8.5 billion to be made available.

Democrats are also insisting that the emergency funding is not transferred from other programmes, while they want safeguards in place to ensure Mr Trump does not use the funds for other reasons.

In a joint statement, Mr Schumer and speaker of the House of the Representatives Nancy Pelosi also said that interest-free loans should be made available to small businesses affected by the outbreak.

The public unease across the United States about the possibility of a widespread coronavirus epidemic grew as stock markets continued to fall on Thursday. US and global stocks fell for the sixth consecutive day, with markets briefly touching “correction territory” – a technical term used when an index drops 10 per cent from a recent high.

The panic gripping markets is a potential upset for Mr Trump in an election year, given that the president has long trumpeted the success of the US economy and the record highs reached by stock markets in the last year.

Earlier this week as he arrived back in Washington from India, Mr Trump suggested the media was exaggerating the threat posed by the virus. The cable news channels were “doing everything possible to make the Caronavirus [sic] look as bad as possible, including panicking markets”, he wrote on Twitter.