Fear and solidarity drives wearing of surgical masks in Japan 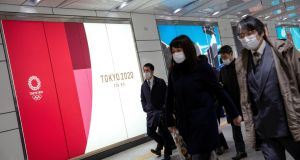 People wearing protective face masks walk past a billboard for the Tokyo Olympics near Shinjuku station in the city on Thursday. Photograph: Athit Perawongmetha/Reuters

As the prognosis for the coronavirus outbreak darkened in Japan this week, an amateur video showed the lengths some people might go to protect themselves.

Shot on a camera-phone in Yokohama, the video purportedly showed a street-fight triggered by someone jumping a queue to buy surgical facemasks.

Sold-out signs and long lines for masks outside pharmacies have become common in Japanese cities. Panic-buying began after the death of the nation’s first coronavirus victim on February 13th.

Thieves pinched 6,000 masks from a hospital in Kobe and there are reports of hoarding and price gouging. The street value for boxes of masks is up to 10 times their list price, according to some reports.

Social media has stepped in with DIY tips on masks made from hand towels and coffee filters. An old post by the disaster response division of the Tokyo police showing how to fashion them out of kitchen towels and rubber bands has been retweeted 14,000 times.

Masks have acquired something of a talismanic quality. In one widely reported case, a panicked passenger riding a subway train pressed the emergency button after another commuter began coughing without a mask.

The war against the virus will ramp up in the coming weeks. On Thursday, Prime Minister Shinzo Abe asked all schools in the country to close, potentially sending millions of children home for over a month.

Officially, the virus is contained to clusters in Japan, which has recorded seven deaths and less than 200 infections (separate from the 700 reported aboard the Diamond Princess cruise ship, anchored off Yokohama). But most experts say that is a serious underestimate because very few people have been tested.

A specialist in infectious diseases who advises the government warned this week that with the Tokyo Olympics five months away, the country was at a crossroads in the fight to prevent Covid-19 from spreading further.

“If there is a significant outbreak or, I do not hope this to happen but, a pandemic of this kind of infectious disease, we really have to think about holding this kind of large event, is it feasible or not?” said Norio Ohmagari.

Fear, then, is partly driving demand for whatever protection people can get, but even before the virus arrived masks were a common accessory in Japan and China. People have been wearing them for decades to avoid spreading germs as a courtesy during cold and flu season.

Millions more began using them to keep pollen from streaming eyes and noses. Sales leapt in 2002-03 during the Sars epidemic and subsequent flu outbreaks. They were even widely donned in 2011 during the Fukushima nuclear crisis.

But the stampede for masks during the coronavirus crisis is puzzling to some given that their effectiveness is questionable, at best. As a prophylactic against germs and viruses, masks may be about as effective as garlic and crucifixes.

Writing in the New York Times recently, Christos Lynteris, a medical anthropologist at the University of St Andrews in Scotland, says the reason for donning masks may be at least as much social as medical.

Mask culture fosters solidarity and “a sense of a fate shared, mutual obligation and civic duty”, he says. “It brings together people faced with a common threat and helps mitigate one of the secondary dangers posed by an epidemic: the breakdown of social norms.”

If holding chaos at bay is a good cause, it’s also good business for manufacturers. The Nikkei business newspaper says factories in Japan are now churning out 400 million masks per month, and even that might not be enough. Prime Minister Abe said 600 million would be needed and insisted he would assume responsibility for oversupply.

Even if the coronavirus runs out of steam next month, the stockpiles will be held over until the next medical emergency. Most people say the same thing – better to wear one, “just in case”.