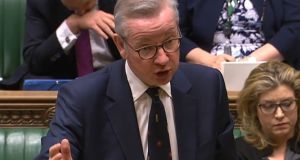 Michael Gove responding in the Commons to a question on Britain’s future relationship with the EU. Photograph: AFP via Getty Images

Michael Gove was at his most plausible and soothing in the House of Commons on Thursday as he outlined his government’s approach to negotiations on Britain’s future relationship with the EU, which start next week.

The 30-page negotiating mandate is full of punchy language about sovereignty and autonomy, and includes a threat to walk away from the talks in June if they are not making progress.

And it rejects key elements of the EU’s proposals, from a “level playing field” to prevent unfair competition to the structure of the talks themselves.

Gove recited to MPs a long list of exclusions, exemptions, refusals and rejections that make up Britain’s negotiating mandate, before predicting that an agreement could be reached without difficulty.

“We will use precedents already well established and well understood to ensure that both sides’ sovereignty is respected. By using already existing precedents we should be able to expedite agreement.

“We will seek functional arrangements that the EU will recognise from its many other relationships. Our proposal draws on existing EU agreements such as the comprehensive economic and trade agreement with Canada, the EU-Japan economic partnership agreement and the EU-South Korea free trade agreement.”

In fact, the expectation on both sides is that there will be an early bust-up, which each side is confident will prove salutary to the other.

The British side believes the Europeans underestimate Boris Johnson’s determination and the strength he gains from his 80-strong parliamentary majority, and the fact that he will not have to face the voters again for five years.

The EU side fears that Johnson is making the same mistake British negotiators have made from the start of the Brexit process in believing that the Europeans will be spooked by the threat of no deal. They believe London underestimates the EU states’ resolve in protecting the single market and defending their own businesses from unfair competition from Britain.

The two sides disagree more on form than on substance, with both sides accepting that there should be no diminution of standards in areas such as employment and the environment.

Yet for the EU form is substance, and commitments that lack a firm legal basis are insubstantial, particularly when they are made by a British government that is not trusted in many European capitals.

Seeking to strengthen its position going into the talks, Britain has made a clumsy attempt to put a few cards back into play in the hope that it can wring concessions from the EU in return for keeping commitments it has already made.

This helps to explain Gove’s doublespeak about the Northern Ireland protocol in the Commons on Thursday, when he promised to respect it but insisted that there would be no border in the Irish Sea.

An exasperated Claire Hanna of the SDLP told him the government’s conflicting statements about the protocol had caused confusion in Northern Ireland.

“We hear from the EU that there will be no derogation from the rules, but reports over the weekend suggested that the government seek to find ways around the protocol, yet the minister and his colleagues say that there will still be unfettered access and no border in the Irish Sea.

“Will the minister please describe in detail, with the crystal clarity he referred to, how those irreconcilable aims will be married up, and how people in Northern Ireland will finally get certainty after 3½ years of bluster and stalled investment?”

Gove said he hoped there was clarity that the government would implement the withdrawal agreement and respect the protocol. Yet suspicion runs so deep in Brussels that senior officials were scrutinising the preposition in Gove’s assurance that Britain would undertake the negotiations “without prejudice and with full respect to” the Northern Ireland protocol and wondering why he said “to” and not “for”.

This is, of course, exactly the kind of confusion London is hoping to sow but by playing with the protocol in this way Johnson’s government risks unnerving an already anxious community in Northern Ireland.

It is also likely to erode further any confidence in European capitals that the prime minister can be trusted to keep his word, encouraging other leaders to insist on the strictly binding commitments Britain is seeking to avoid.