Trump address fails to close gap between him and Democrats

In a 10-minute address to his fellow Americans US President Donald Trump warned that the United States faces a security and humanitarian crisis on its southern border, but stopped short of declaring a national emergency. Video: The White House 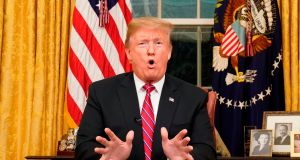 US president Donald Trump: Much of the content of his speech contained false or at least misleading claims. Photograph: Carlos Barria/AFP/Getty

US president Donald Trump delivered his first prime-time address to the nation from the Oval Office on Tuesday night. But anyone hoping for a breakthrough on the government shutdown or any fresh ideas on how to break the impasse over the Mexican border wall will have been disappointed.

Rather than shift the debate, Trump’s nine-minute speech repackaged many of the themes that characterised his campaign rallies and tweets.

For a man who shot to fame through the wildly successful programme The Apprentice, television should be a natural milieu. But the unique genre of the presidential address, which demands that the president speak directly into a camera, reading prepared remarks from a teleprompter, left Trump sounding flat and disengaged, his eyes at times squinting uncomfortably into the camera as he read from the scripted remarks.

Trump did, however, make an attempt to strike a presidential note. The first half of his speech was more sober in tone than the bombast that characterises his rally appearances.

He spoke of the “tragic reality” of illegal immigration and the “cycle of human suffering”. He even refrained from mentioning the wall – or the “physical barrier” as he has now termed it – until halfway into his speech, a far cry from the “build the wall” chants of his political rallies. Instead he highlighted first the other proposals his administration is offering such as extra bed spaces to house incoming detainees, and enhanced medical support.

But his content soon shifted, as he painted a picture of a drug-fuelled illegal immigration route through the southern border. Focusing on the security risks of illegal immigration, he described in gruesome detail attacks on American citizens by illegal aliens, such as an Air Force veteran who was “raped, murdered and beaten to death with a hammer” by an immigrant, and another case in Georgia which saw an immigrant charged with “killing, beheading and dismembering his neighbour”.

Much of the content of his speech contained false or at least misleading claims, which were quickly pounced upon by analysts on the news channels who live fact-checked his speech. Some highlighted the fact that most of America’s drugs are smuggled through legal points of entry at ports, for example, while others focused on the tenuous claim that Mexico will indirectly pay for the wall through the new recently negotiated US-Canada-Mexico trade deal.

But the main fallout from the speech was the absence of any new solution to the ongoing government shutdown, which has arisen because of deadlock over funding for the border wall.

Democratic leaders Nancy Pelosi and Chuck Schumer – who delivered a satisfactory if stilted rebuttal of Trump’s speech from Congress – offered no hint that they were prepared to shift their position, with Schumer dismissing the wall as “ineffective, unnecessary”.

While Trump refrained from declaring a national emergency, which could enable him to bypass Congress in securing funding for the wall, he has left open the possibility of doing so at a later date. Ultimately, for the millions of Americans who tuned in for the prime-time address, it remained unclear what it actually achieved.

Almost three weeks into the government shutdown, Democrats and the White House appear to be as far apart as ever.