Migrants onboard the German rescue ship Sea-Watch 3 cheered and jumped for joy on Wednesday (January 9) as they were told they were finally heading for a port in Malta after weeks stranded at sea. Video: Sea Watch 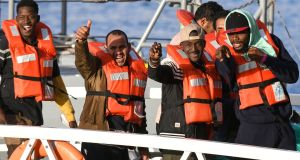 Some of the 49 migrants who had been stranded on the ‘Sea-Watch 3’ react towards the media as they disembark from a Maltese patrol boat on Wednesday. Photograph: Matthew Mirabelli/AFP/Getty Images

The Government has agreed to welcome five unaccompanied minors to Ireland out of a group of migrants who were rescued in recent weeks from the Mediterranean Sea.

Minister for Justice and Equality Charlie Flanagan, and Minister of State for Equality, Immigration and Integration David Stanton said they were pleased to announce the move - part of an agreement between eight European countries to assist almost 300 migrants who have been brought to Malta since the start of December - as “as a gesture of solidarity and humanitarian assistance”.

Speaking after discussions between Irish officials, the Maltese authorities and and the European Commission, Mr Flanagan said: “These children have been rescued from the Mediterranean Sea in humanitarian search and rescue missions and have been through a terrible ordeal.

“They will be welcomed to Ireland under our Irish Refugee Protection Programme, which has a proven record of helping those who are most vulnerable. We will ensure that they are provided with all of the necessary supports.”

There will be further contact between Irish and Maltese officials to establish the appropriate arrangements for the transfer of the unaccompanied minors to Ireland, the Ministers said.

Earlier, the Maltese prime minister, Joseph Muscat, announced that 49 people who were rescued by the German NGOs ships Sea-Watch 3 and Sea-Eye off the coast of Libya in December, would be allowed to disembark in the Maltese capital of Valletta before being sent to Italy, France, Germany, Portugal, Ireland, Romania, the Netherlands and Luxembourg.

The ships, operated by two German charities, had been stranded in Maltese waters after Italy, Malta and other EU states refused to offer them a safe port.

“The operation to transfer the migrants to our armed ships will start as soon as possible,” Mr Muscat said. “But the crisis wasn’t created by us. We’re not making a war against the NGOs, we’re appealing to all to respect the rules.”

Mr Muscat added that the deal would also see the eight countries taking in 249 other people brought to Malta by its military patrol boats in December.

Matteo Salvini, Italy’s deputy prime minister and interior minister, criticised the distribution plan, arguing that the EU was “succumbing to the blackmail of [PEOPLE-]smugglers and NGOs”.

“This risks becoming a huge problem,” he said during a press conference in Warsaw with the Polish interior minister, Joachim Brudzinski.

The Sea-Watch 3, with 32 rescued people on board, had been waiting off the coast of Malta for 19 days, while an additional 17 were rescued on December 29th by Sea-Eye. Rescuers have spoken about the turmoil among the rescued people as the standoff continued, with some jumping into the sea in an attempt to reach Malta.

Malta allowed the two ships to shelter from bad weather near its coast and for them to be resupplied with fresh food and water, but until now had refused to let those onboard disembark, arguing that they had been rescued beyond the country’s search-and-rescue zone.

Between 2,000 and 3,000 people rescued in the Mediterranean have been denied entry into Italy in similar standoffs since Salvini, who leads the far-right League, started a clampdown on immigration within days of coming to power last June. Earlier this week he clashed with the prime minister, Giuseppe Conte, and his coalition partner, Luigi Di Maio, leader of the Five Star Movement, who both said that women and their children should be taken off the boats and brought to Italy. - Additional reporting Guardian