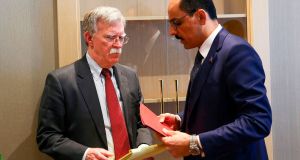 The fallout from Donald Trump’s plan to withdraw US troops from Syria intensified on Tuesday as Turkish president Recep Tayyip Erdogan launched a blistering attack against US national security adviser John Bolton in the Turkish parliament.

In a sign of deepening tensions between the Nato allies, Mr Erdogan refused to meet Mr Bolton, who is on a four-day visit to Israel and Turkey. Instead he rebuked the senior Trump administration official for comments he made in Israel on Monday asking Turkey not to attack Kurdish militants in northern Syria.

Mr Erdogan said Mr Bolton had “made a serious mistake” in trying to set conditions around the withdrawal of US troops from the region.

Turkey has long argued that the Kurdish YPG group, which has been a strong ally of the United States in its fight against Islamic State in northern Syria, is a militant group which threatens Turkey’s security.

“We cannot swallow...the message that Bolton gave in Israel,” the Turkish president said, claiming that the US national security adviser “probably doesn’t know” the difference between ethnic Kurds and armed Kurdish groups.

Mr Erdogan warned that Turkey could launch a military attack against the group. “We will do what is necessary against these terrorists.”

The deterioration of relations between Ankara and Washington has added a further complication to Mr Trump’s surprise decision to withdraw troops from Syria. The US was banking on working with Turkey to secure an orderly withdrawal from the region, but tensions over possible Turkish actions against the YPG could scupper Mr Trump’s plans for a swift US withdrawal.

Since his initial announcement of the troop withdrawal last month Mr Trump has equivocated over the timeline. While initially he stated that US military personnel would withdraw “immediately”, he later extended the timeline to four months.

The Turkish president highlighted the mixed messages emanating from Washington. “Although we made a clear agreement with US president Trump, different voices are emerging from different parts of the administration,” he said, adding: “Trump’s remarks continue to be the main point of reference for us.”

US officials sought to play down the significance of Mr Erdogan’s snubbing of Mr Bolton, claiming that a meeting with the Turkish president had not been definitively scheduled.

However, the renewed tensions between the two countries over Syria has sparked concern that confusion over the timetable and practicalities of the proposed US withdrawal could embolden Syrian leader Bashar al-Assad and his backers Iran and Russia.