Erdogan snub exposes US disarray on withdrawal from Syria 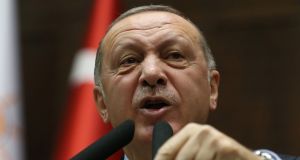 Trump announced the decision after a phone call with the Turkish president on December 19th. Just a few weeks later it is Erdogan who is threatening to disrupt an orderly US withdrawal from the war-torn country.

At issue is the future of the YPG , the Kurdish group that has been fighting the Islamic State terror group in the region with the backing of the United States. Turkey has long argued that the YPG is itself a terrorist group and essentially the Syrian branch of the Kurdistan Workers Party (PKK), which has fought a separatist struggle against the Turkish state since 1984.

On Sunday Bolton, during a visit to Israel, said he was travelling to Ankara to seek guarantees from Turkey that Kurdish fighters in the region would be protected following the US pull-out from Syria. Erdogan on Tuesday denounced those comments as “unacceptable”.

Not for the first time, analysts are wondering what Trump precisely said in a phone call with a foreign leader. The US’s planned withdrawal from Syria has become mired in confusion, with the Kurdish issue now likely to delay the pull-out amid fears not only for the safety of the Kurdish fighters but also that they could turn to away from the US to Russia and Syrian dictator Bashar al-Assad.

The public spat between the Turkish and US administrations serves to highlight the lack of strategic planning behind the decision to announce the withdrawal of the US troops, which prompted the departure of defence secretary Jim Mattis.

Trump’s surprise decision also unnerved many Republicans in Congress who were taken unaware by the move, particularly given the fact that only 2,000 US troops are stationed in Syria.

Since the December 19th announcement the US president has flip-flopped on the timing and logistics of the withdrawal. After initially claiming that it would be completed in 30 days he extended the timescale to four months.

Bolton’s four-day trip to Israel and Turkey has augmented rather than clarified the confusion for the US’s allies, many of whom fear the move may embolden Iran and Russia.

Secretary of state Mike Pompeo on Tuesday began an eight-country tour of the Middle East, in a bid to assure allies that the US is not abandoning the region. He will also seek to underline the US’s commitment to restraining Iran.

In comments certain to alarm Israel and others, Trump said last week that the Iranians “can do what they want” in Syria. Following Bolton’s less than successful visit to Israel and Turkey, Pompeo’s job will be to convince US allies in the region that, despite all suggestions to the contrary, the US really does have a cohesive strategy on Syria.