US shutdown: Donald Trump tweets ‘not much headway’ 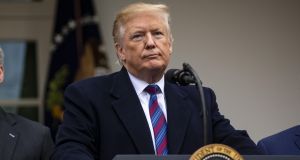 Sunday is day 16 of a partial government shutdown that US president Donald Trump said could go on for months or years, if he is not given funding for a wall on the Mexican border.

As new talks were held yesterday without result, potentially devastating effects of the standoff were coming into focus.

The Supplemental Nutrition Assistance Program, which provides dietary assistance to 38 million low-income Americans colloquially known as food stamps, will face cuts and will run out of funds in March. Tax refunds totalling billions of dollars and due in April may be delayed.

And, CNN reported, Transportation Security Agents at major airports are beginning to call out sick, after being forced to work without pay.

A read-out provided by a Pence aide said that after a “productive” conversation, the group agreed to meet again on Sunday.

The “dollar figure” behind Mr Trump’s demand for funding – $5.6bn – was not discussed, the aide said, adding that Democrats “requested further details in writing” regarding homeland security needs.

Mr Trump then tweeted that he had been briefed, but: “Not much headway made today.”

The president spent his day camped out on Twitter, claiming “great support” for his position. Attacking CNN for its TSA story, he praised a Department of Homeland Security spokesman for a Trump-style tweet which called the outlet “fake news” for its story about “a non-existent sick out”.

CNN responded by backing its work, pointing to a TSA statement “acknowledging increased call-outs after we published” and saying the spokesman and Mr Trump “may not like the truth but that won’t stop us from reporting”.

V.P. Mike Pence and team just left the White House. Briefed me on their meeting with the Schumer/Pelosi representatives. Not much headway made today. Second meeting set for tomorrow. After so many decades, must finally and permanently fix the problems on the Southern Border!

I don’t care that most of the workers not getting paid are Democrats, I want to stop the Shutdown as soon as we are in agreement on Strong Border Security! I am in the White House ready to go, where are the Dems?

The shutdown has consumed Washington as it has divided it. But unlike House Republican leader Kevin McCarthy and minority whip Steve Scalise, Mitch McConnell, the Senate majority leader, did not stand with Mr Trump at a Friday press conference in which he made rambling, contradictory and combative remarks.

Mr McConnell has sought to leave Democrats and the president to fight it out, thereby avoiding political damage. Mr Trump shrugged off Mr McConnell’s absence but minority leader Chuck Schumer seemed determined to highlight it.

“The president needs an intervention,” he said, “and Senate Republicans are just the right ones to intervene.”

Mr Trump campaigned on a promise to build the wall, which he says is necessary to stop undocumented migration and drug smuggling, and to stop terrorists entering the country.

The last claim is as frequently questioned by factcheckers as it is trotted out by Mr Trump and supporters. On Friday, Nielsen said more than 3,000 “special interest aliens” had been stopped in an unspecified period. It was swiftly pointed out that nearly all people crossing the southern border who are not from western countries are thus classified.

Mr Trump also campaigned on a promise that Mexico would pay for the wall. He and his allies claim a new trade deal, not yet ratified by Congress, will provide savings to meet the promise. Opponents and factcheckers doubt that.

Democrats who now control the House have passed bills to fund the government but flatly refused to provide the $5.6 billion for the wall, which speaker Nancy Pelosi has called “immoral” and which most experts believe would be ineffective. Public polling shows opposition to Mr Trump on the wall and immigration in general.

But the president is also playing to his political base. Asked about a claim made by Mr Schumer on Friday that the White House was ready to continue the shutdown indefinitely, Mr Trump said: “Absolutely, I said that.”

He also said he could declare a national emergency and build the wall anyway “if I want”; rhapsodised about the qualities of steel, the material he now says the wall will be built with instead of concrete; and claimed federal employees affected by the shutdown were “in many cases the biggest fans of what we’re doing”.

Mr Trump could technically declare an emergency and build his wall. On Friday, University of Texas law professor Steve Vladeck tweeted: “One of the enduring phenomena of the Trump era is going to be the list of statutes that give far too much power to the president, but that we didn’t used to worry about because we assumed there would be political safeguards. Today’s entrant: The National Emergencies Act of 1976.”

It has been widely suggested that action on the status of undocumented migrants brought to the US as children might be on the table. But Democrats are wary. A previous shutdown, one of three within a year, was triggered by Trump’s escalating demands for wall funding in return for reform.

Media outlets have reported increasing hardship for about 800,000 federal employees either sent home or working without pay. On Friday, raises for top officials including cabinet appointees were put on hold.

Deaths were reported in national parks with reduced staffing. According to the Administrative Office of the US Courts, federal courts will run out of money on 11 January. After that, “judge-by-judge” decisions on how to maintain services could involve suspending civil cases altogether, which could have serious ramifications for US companies, Fortune reported. The immigration system is not immune. E-Verify, the online system by which employers confirm the eligibility of employees to work in the US, is down.

“We won’t be opening [government] until it’s solved,” Mr Trump insisted at his press conference. “I don’t call it a shutdown. I call it doing what you have to do for the benefit and the safety of our country.”

Amid the continued standoff, on Saturday night another key Pentagon figure, chief of staff Kevin Sweeney, announced his resignation.

In a short statement, the retired rear admiral said: “After two years in the Pentagon, I’ve decided the time is right to return to the private sector. It has been an honour to serve again alongside the men and women of the department of defence.”

Citing an anonymous source, CNN reported on Sunday that Mr Sweeney had been “forced out” by the White House. – Guardian