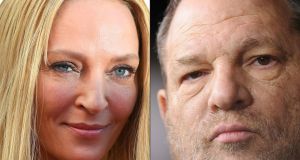 Actor Uma Thurman has accused movie producer Harvey Weinstein of sexually assaulting her at a London hotel after they worked together on the 1994 hit film Pulp Fiction.

In a New York Times article on Saturday by columnist Maureen Dowd, Thurman broke her silence after saying last October she would wait to speak out about inappropriate behaviour in the workplace because she did not want to say anything in anger.

Thurman became the latest of more than 70 women who have accused 65-year-old Weinstein of sexual misconduct, including rape. A spokeswoman for Weinstein said on Saturday that he had apologised to Thurman for making an “awkward pass” at her 25 years ago, but that her claims about being physically assaulted were untrue.

In the Times article, Thurman (47), said Weinstein pushed her down when she met him in his suite at London’s Savoy Hotel.

“He tried to shove himself on me. He tried to expose himself. He did all kinds of unpleasant things. But he didn’t actually put his back into it and force me,” she told the newspaper.

Asked for further comment by Reuters, a representative for Thurman said the Times article spoke for itself.

A spokeswoman for Weinstein said in a statement that he was saddened and puzzled as to why someone he considers a colleague and friend had waited so long to make the allegations public.

“Mr Weinstein acknowledges making an awkward pass 25 years ago at Ms Thurman in England after misreading her signals, after a flirtatious exchange in Paris, for which he immediately apologised and deeply regrets,” the spokeswoman said. “However, her claims about being physically assaulted are untrue.”

As well as starring in Pulp Fiction by director Quentin Tarantino, Thurman was the lead actor in his two-film Kill Bill action series, which were produced by Weinstein’s Miramax studio and earned more than $330 million at global box offices. – Reuters