‘Injustice in concrete form’, the Berlin Wall is gone for as long as it stood

From 1961 to 1989, Soviet construct made sure ‘angst, discipline and conformity ruled’ 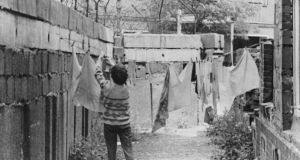 A woman hangs out washing in her back yard on a line attached to a section of the Berlin Wall in August 1963. Photograph: Keystone/Hulton Archive/Getty Images

Michael Sendsitzky remembers a sign on the bank of Berlin’s Spree river, taunting him every day as he steered his barge, filled with coal and sand, up and down.

Near the Oberbaum Bridge, on the southern river bank, the sign faced the blank concrete Berlin Wall, and the men who guarded it. With melancholic Berlin humour, the sign read: “It’s quicker to get to the moon.”

On one side of the river was Kreuzberg in West Berlin, the other bank was the start of the eastern neighbourhood of Friedrichshain. For these Berlin neighbours, the other might as well have been in outer space. But no longer.

Monday is a rare, happy anniversary in Berlin, the day when the Berlin Wall has been gone as long as it stood: 28 years, two months and 26 days.

The Spree river was Michael Sendsitzky’s workplace for seven years until 1976, up and down the floating death strip between the wall, watch towers, guard dogs, barbed wire – and the west.

“I would have preferred to be a sailor on the high seas, to see a bit of the world, but it wasn’t possible because of politics,” he said.

To ensure he wasn’t tempted to flee, his barge was often followed by border guards in sentry boats, machine guns ready.

Built in 1961, the 155km-long Berlin Wall was a defeat for the victorious second World War allies who divided post-war Germany – and Berlin – into four sectors. Eventually the British, Americans and French united their sectors in Berlin while the Soviets kept their sector apart.

East Berlin authorities, under instructions from Moscow, began to erect the wall in secret in the early hours of August 13th, 1961 to halt Berliners from the socialist east fleeing to the capitalist west.

Overnight West Berlin, already an island surrounded by East Germany, was now a walled city. Getting in and out was a tiresome rigmarole for visitors while, for West Berliners, ignoring the wall was a point of honour. For East Berliners, locked into the Soviet sphere, ignoring it was about survival.

“The Berlin Wall was injustice in concrete form, visible every day,” said Roland Jahn, a former East German dissident and now administrator of the archive of the Stasi secret police. “The wall made sure that angst, discipline and conformity ruled.”

Another, oft-forgotten inner-German border, was erected north-south between the two German states, from the Baltic Sea to Bavaria. Failed escape attempts on the two borders claimed 466 people lives until November 9th, 1989.

A growing tidal wave of popular protest against communist rule – that began a decade earlier in Poland – finally flattened the Berlin Wall.

Today the Oberbaum Bridge is a busy artery for commuters and party people over the Spree river. Little besides a row of cobblestones recalls the human tragedy of Berlin’s division here for 28 years.

It was on this bridge, in November 1989, where Michael Sendsitzky squeezed through the narrow border crossing to the west. In the excitement of his first trip to West Berlin – the lights of the Kurfürstendamm boulevard, his first packet of real coffee – Sendsitzky forgot all about the sign he once passed every day. He had finally made it to the moon.

Back on the Oberbaum Bridge today, he doesn’t know who put up the moon sign or when it vanished. And, 10,316 days after the Berlin Wall fell, he is happy not to care.

“My life has been in a historic period,” he said. “And that’s my great source of happiness.”