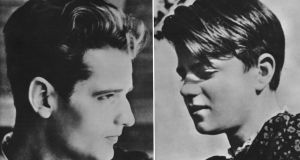 Hans Scholl and his sister Sophie circa 1940. Both were members of the non-violent White Rose resistance group against the Nazis. After their arrest for distributing anti-war leaflets at the University of Munich, they were convicted of high treason and executed by guillotine. Photograph: Authenticated News/Archive Photos/Getty Images

Generations of German schoolchildren have grown up with the story of resistance fighters Sophie and Hans Scholl, the Munich siblings executed in 1943 for challenging the Nazi regime.

Their “White Rose” movement shines as beacon of courage, its founders idealised to the point of sainthood, after whom dozens of streets and schools are named.

But a new biography paints a more complex and differentiated picture of Hans Scholl as a passionate and romantic young man with an extreme, elitist streak – attracted to women, men, and fascism.

Born in Ulm in 1918 and raised in a liberal, Lutheran family, he disobeyed his father aged 15 to join a group linked to the Hitler Youth. In 1935 he was a flag-bearer at the Nazi Nuremberg rally.

“We want to be a flame, our strength must be resilient steel,” he wrote enthusiastically to a friend afterwards.

A court eventually dismissed the charges, and described the affair as a 'youthful aberration', but the shame and disgrace was huge

Two years later he was charged with “immoral behaviour” under laws that criminalised homosexuality.

His boyfriend Rolf Futterknecht, with whom he had a year-long relationship doing “wild things” together, betrayed him to the SS.

In questioning, Scholl owned up to the relationship, saying he was motivated by “great love that I had for Futterknecht”.

A court eventually dismissed the charges, and described the affair as a “youthful aberration”, but the shame and disgrace was huge.

Hans soon found a girlfriend and distanced himself from the Nazi movement to become a passionate Protestant Christian.

He began studying medicine in Munich and, in his holidays, was drafted into the Wehrmacht to serve as a medical officer. For three months in 1942 he served on the eastern front.

Back in Munich, he and his 21 year-old sister Sophie and a group of friends devised a daring plot to undermine the Nazi regime and its wartime propaganda.

In six anonymous pamphlets, distributed at Ludwig Maximilian University in Munich, they criticised Hitler, spoke of the mass murder of Jews and growing resistance to the Nazis.

“We will not be silent, we are your guilty conscience, the White Rose will allow you no rest!” ended the fourth pamphlet.

The sixth pamphlet discussed the Nazi defeat in Stalingrad, a battle that cost 2.2 million lives and marked a turning point in the second World War.

As they distributed that sixth pamphlet the siblings were spotted by the university caretaker, arrested and interrogated.

In the new biography, author Robert Zoske, a Hamburg pastor, has uncovered correspondence from Hans Scholl suppressed by a surviving sister in the postwar years.

“She didn’t mention his homo- or bisexuality because then he couldn’t serve as a role model,” said Pastor Zoske.

Four days after their arrest, Hans and Sophie Scholl underwent a show trial and were sentenced to death by guillotine on the same day: February 22nd, 1943.