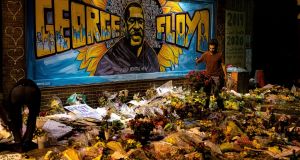 A file image of a memorial for George Floyd near the site where he was detained and died with the knee of a police officer on his neck in Minneapolis. Photograph: Joshua McFadden/The New York Times.

George Floyd told police officers more than 20 times that he could not breathe, according to newly released transcripts of Minneapolis police body camera footage documenting the last minutes of his life.

Mr Floyd also exclaimed several times that he believed the officers were killing him.

The transcripts offer one of the most thorough and dramatic accounts yet of the moments before Mr Floyd’s death, which set off a national movement about police use of force.

They were filed in state court in Minneapolis on Tuesday as part of an effort by a former officer, Thomas Lane (37) to have charges that he aided and abetted Mr Floyd’s murder thrown out by a judge.

Mr Floyd died on May 25th last after an officer, Derek Chauvin (44), pressed his knee down onto his neck until he was no longer moving. Mr Chauvin, who was on the force for 19 years, faces second-degree murder and manslaughter charges over Mr Floyd’s death and up to 40 years in prison if he is convicted.

Mr Floyd was being arrested after allegedly using counterfeit money to buy cigarettes in a shop.

Mr Lane and Alexander Kueng (26), who were both rookie officers, and Tou Thao (34) also face 40 years in prison if convicted. All four officers were fired.

The filings made in court this week include 82 pages of body camera transcripts and the 60-page transcript of an interview with Mr Lane by investigators from Minnesota’s Bureau of Criminal Apprehension.

In that interview, when he was asked whether he felt at the time that Mr Floyd was having a medical emergency, Mr Lane replied, “Yeah, I felt maybe that something was going on.”

The transcripts zero in on the most critical moments of Mr Floyd’s restraint by the officers. While Mr Floyd was being restrained on the ground, on his stomach, with Mr Chauvin’s knee pressed onto his neck, Mr Lane asked whether Mr Floyd should be turned over onto his side.

Mr Chauvin said, “No, he’s staying put where we got him.”

Mr Lane then said he was worried Mr Floyd might be having a medical emergency.

“Well that’s why we got the ambulance coming,” Mr Chauvin responded, according to one of the transcripts.