Trump learned to lie to please his father, niece says in new book 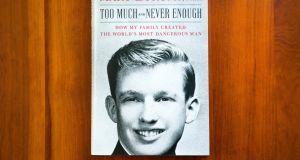 Too Much and Never Enough, the controversial new book by Mary Trump about her uncle, US president Donald Trump. Photograph: Jim Lo Scalzo

Donald Trump developed a penchant for employing hyperbole and lying after watching his “high-functioning sociopath” father demean any members of the family who showed weakness, according to a new memoir by his niece.

In Too Much and Never Enough, Mary Trump (55) describes her uncle as a bully and narcissist who learned to lie to ensure that his father, Fred Trump, did not treat him with the scorn the New York builder laid on his eldest son, Freddie.

In the memoir, to be published later this month, Mr Trump’s niece says his long history of lying has become a more serious problem now that he is having to deal with crises, including the coronavirus pandemic. She says he is not equipped to handle it.

“His ability to control unfavourable situations by lying, spinning and obfuscating has diminished to the point of impotence in the midst of the tragedies we are currently facing,” Ms Trump writes in the book.

The publication comes four months before the presidential election as fresh questions are being asked about Mr Trump’s character and performance in office, particularly his handling of the pandemic and his response to the protests following the death of George Floyd.

It also comes just weeks after John Bolton, his former national security adviser, wrote a scathing memoir in which he said Mr Trump was unfit to serve as commander-in-chief.

Mr Trump’s younger brother, Robert, tried to block Mary Trump’s book from being published by Simon & Schuster, but he was rebuffed in court. Asked about the memoir on Tuesday, Kayleigh McEnany, White House press secretary, said it was a “book of falsehoods and that’s about it”.

A psychologist by training, Ms Trump says that in addition to meeting the clinical definition for narcissism, the president may also suffer from antisocial personality disorder, dependent personality disorder and learning disabilities that make it hard for him to process information.

“Donald Trump’s pathologies are so complex and his behaviours so often inexplicable that coming up with an accurate and comprehensive diagnosis would require a full battery of psychological and neuropsychological tests that he’ll never sit for,” she writes. The president has described himself as a “very stable genius”.

In the 225-page book, Ms Trump describes her uncle as a fraud who has “failed up” his whole life. She claims that he paid a friend to take the SAT college admission tests to help have him accepted to the University of Pennsylvania.

Ms Trump says the key to understanding her uncle lies in his relationship with his deceased father, a strict man who had few emotional connections with his children. She writes that Fred Trump taught his son never to apologise because it would be seen as a sign of weakness.

She claims that Fred Trump frequently rhetorically abused his eldest son, Freddie – her father – who wanted to be an airline pilot rather than working in the family business. She says Donald took advantage of this by repeatedly pointing out what he and his father viewed as Freddie’s weaknesses as he positioned himself to take over the business instead of his older brother.

The book describes a highly dysfunctional and hierarchical family where their mother was often sidelined by illness while their father was only interested in furthering his building empire in suburban New York. Ms Trump says her grandparents’ large house had a library that was devoid of books until Donald Trump published The Art of the Deal.

In explaining the family, she says Fred Trump’s need for recognition “propelled him to encourage Donald’s reckless hyperbole and unearned confidence that hid Donald’s pathological weaknesses and insecurities”.

Ms Trump claims that her uncle at one point tried unsuccessfully to trick his then-ailing father into amending his will so that his son would have complete control over his estate.

She says Mr Trump has been preoccupied with winning – and being seen to be winning -–since he was young. She recounts how he would even strive to win when he was playing sports with his younger cousins. “Even with little kids, Donald had to be the winner,” she recalls about her uncle, whom she adds also lacks a sense of humour.

Ms Trump acknowledges giving the New York Times documents about the president’s taxes for a 2017 story because she was concerned about his behaviour in the White House while watching “democracy disintegrating”.

She also takes aim at Mr Trump’s support among US evangelicals, saying her uncle has “no principles” and that “the only time Donald went to church was when the cameras were there”.

Ms Trump says her uncle launched his presidential campaign in 2015 as a marketing stunt. When she saw the result the morning after the election, she writes that “it felt as though 62,979,636 voters had chosen to turn this country into a macro version of my malignantly dysfunctional family”. – Copyright The Financial Times Limited 2020