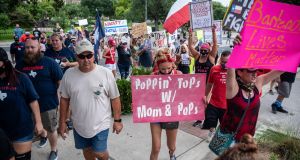 Demonstrators march toward the governor’s mansion during a ‘Bar Lives Matter’ protest in Austin, Texas, on Tuesday. Photograph: Sergio Flores/Bloomberg

Texas governor Greg Abbott has issued an order requiring face masks be worn in public in the state’s hardest-hit regions, the latest attempt to snuff the coronavirus outbreak that continues to spread in the US south and west.

The executive order from Mr Abbott, which applies to counties with 20 or more positive tests, was accompanied by a measure giving local governments the authority to limit public gatherings to 10 people statewide.

“We need to refocus on slowing the spread but this time we want to do it without closing down Texas again,” Mr Abbott said on Thursday.

The governor’s order came as the number of new cases nationwide increased by more than 50,000 for the second day in a row, led by Florida, which tallied Thursday’s sharpest uptick. The state reported 10,109 new cases over 24 hours - a record that was up from 6,605 recorded on Wednesday.

According to the Covid Tracking Project, the US saw 52,815 new cases, just short of the 52,982 record increase set on Wednesday. In addition to Florida, Georgia and South Carolina saw record increases on Thursday.

The Texas face mask mandate marks a sharp reversal for Mr Abbott, who aggressively reopened the state’s economy in May. The Texas governor has been forced into other lockdown U-turns in recent days, ordering bars to close and banning elective surgeries at hospitals in the state’s biggest cities to free up beds for coronavirus patients.

Texas recorded 7,915 new infections on Thursday, just under the record 8,076 tallied on Wednesday.

President Donald Trump insisted authorities were “putting out the fires”, despite alarms raised earlier this week by Anthony Fauci, the US’s leading infectious disease expert, that the new outbreak risked spinning out of control.

“Some areas that were hard-hit are now doing very well,” Mr Trump said at a White House news conference intended to tout a sharp drop in the unemployment rate. “Some were doing very well and we thought they may be gone and they flare up and we’re putting out the fires.”

Joe Biden, Mr Trump’s presumptive Democratic challenger, used a set-piece live address to attack the president for not mentioning the 50,000 new cases and failing to provide a co-ordinated response to reopening.

“We’ve seen cases spiking around the country; some businesses are closing down again,” Mr Biden said from his home in Delaware. “Trump wants to declare this health crisis over and unemployment solved. He’s deadly wrong – on both fronts.”

Mr Biden contrasted the US response to that of its peers, including the EU, which has banned Americans from travelling to Europe owing to the rise in US cases. “We’re already at more than 128,000 dead – and that number keeps climbing,” he said. “Other countries have figured out how to get the virus under control, reopen their economies and put their people back to work.”

Florida has been established as one of the new US hotspots for Covid-19, but the state government has been reluctant to further roll back its reopening plans, having already ordered bars across the state to close last week.

“We’re not going back, closing things,” Ron DeSantis, the Florida governor and a Trump ally, said on Wednesday, suggesting that the spread was more a result of younger people failing to comply with health guidelines than the reopening of businesses.

Ahead of the July 4th weekend, which has the potential to be a so-called superspreader event, some regions in Florida have issued their own guidelines and restrictions to residents.

Cities in the Florida Keys decided on Wednesday to cancel their fireworks displays, while festivities in places such as Orlando are still expected to go ahead. Copyright The Financial Times Limited 2020