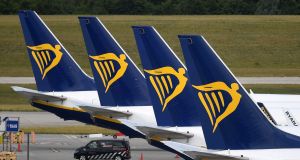 Ryanair’s Irish pilots have accepted a 20 per cent reduction in pay, which will be restored over the coming four years, the airline said on Friday while also noting that 90 per cent of customer refunds would be processed by the end of this month.

The airline welcomed the acceptance by all of its pilots of the four-year agreement, which also requires improvements on rosters, flexible working patterns and a change to annual leave. It said the deal was devised to help minimise pilot job losses.

“This agreement gives Ryanair a framework to flex its operation during the Covid-19 crisis and a pathway to recovery when the business returns to normal in the years ahead,” the airline said in a statement.

Ryanair said it was making progress in processing customer refunds for flights cancelled during the March-June period as a result of the Covid-19 crisis. It said all March refund requests had now been cleared. By the end of June, 50 per cent of April refunds were cleared and the remainder of those are expected to be processed by July 15th.

The airline expects that by the end of the month, refunds for all of May and for most of June will have been processed.

“We will continue to process these cash refunds as fast as we can, and would encourage any customers who haven’t yet requested a cash refund, to do so with our customer service team and we will process their request as quickly as possible,” said Ryanair DAC chief executive Eddie Wilson.

“These agreements demonstrate that Ryanair pilots wish to work with the airline during the Covid-19 crisis where Ryanair will carry 50 per cent less traffic, at significantly lower fares for the foreseeable future,” the airline said.

The company said it was inviting applications for “unpaid leave to address surpluses for both pilots and cabin crew as part of the agreements”.

Similar deals have been reached in the UK. Earlier this week the airline’s UK pilots accepted pay cuts of 20 per cent while cabin crew there are also being balloted.

1 Most workers now expect ability to work from home part-time
2 More than 40% of help-to-buy recipients already had deposit
3 Owner of Dundrum Town Centre to sell prized assets
4 Elderly parents living in property you own will save you on capital gains tax
5 Microsoft to press on with TikTok deal after call with Trump
6 Help-to-Buy bonus; a taste for working from home; and two landmark deals
7 Law governing construction pay rates remains pending State appeal
8 Stocktake: Is the shoeshine indicator flashing red for stocks?
9 Can a first-time buyer get relief on a buy-to-let home?
10 Pension savers pay the price for banks being uncompetitive
Real news has value SUBSCRIBE