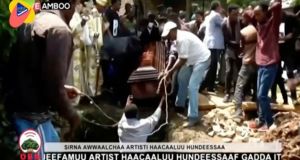 In this image taken from OBN video, the coffin carrying Ethiopia singer Hachalu Hundessa is lowered into the ground during the funeral in Ambo, Ethiopia, on Thursday. Photograph: OBN via AP

Ethiopian authorities are braced for further violence after two days of unrest following the assassination of the popular musician Haacaaluu Hundeessaa earlier this week.

So far as many as 88 people are thought to have died since protests following Haacaaluu’s murder at his home in Ambo, a city 110km outside the capital, Addis Ababa, on Monday.

Even as the singer’s funeral was being held on Thursday morning, a bomb in the capital was reported to have killed eight people amid further clashes between demonstrators, security forces and armed gangs.

The killing of Haacaaluu (34) has tapped into grievances fuelled by decades of government repression and what the Oromo, Ethiopia’s biggest ethnic group, describe as their historic exclusion from political power.

“Haacaaluu represented the [OROMA]struggle over recent years and there’s been a huge outpouring of emotion that has led people on to the streets. There’s a sustained protest continuing with some lawlessness attached. Live rounds have been fired and escalation has come very, very quickly,” said Ahmed Soliman, an east Africa analyst at Chatham House in London.

On Wednesday, gunshots were heard in many neighbourhoods in Addis Ababa and tyres smouldered as gangs armed with machetes and sticks roamed the streets. Witnesses described a situation as pitting youths of Oromo origin against other ethnic groups and the police. At least one police officer is reported to have been killed.

“We had a meeting with the community, and we were told to arm ourselves with anything we have, including machetes and sticks. We no longer trust the police to protect us so we have to prepare ourselves,” said one resident in Addis Ababa, who, like others interviewed, asked not to be named for fear of reprisals.

There were further clashes overnight amid reports the military had been deployed in some neighbourhoods to restore calm.

Prof Awol Allo, at Keele University in the UK, said a row over whether to bury Haacaaluu in Ambo or Addis Ababa had revealed the political tensions underlying the protests. The capital is under federal, not regional, control.

“It’s very contentious. Oromos claim the city to be theirs, as it lies fully within the Oromo regional state,” Prof Allo said.

Local media reported that Haacaaluu’s father had criticised attempts by some Oromo activists and politicians to have his son buried in the capital.

“Why was this needed? His father, his mother and his family wanted him to be laid to rest in Ambo. To blame this on the government is not correct. This is tantamount to burying Haacaaluu’s truth,” Hundeessaa Bonssaa was quoted as telling mourners at the funeral on Thursday, which took place in Ambo.

Santu Demisew Diro, the singer’s wife, called for a monument to be erected in Addis Ababa to her late husband’s memory.

“Haacaaluu is not dead. He will remain in my heart and the hearts of millions of Oromo people forever,” she said.

A live broadcast by Oromo Broadcasting Network, which is owned by the Oromia regional state, showed much of the stadium remained empty.

Police were turning people away from the ceremony, said one Ambo resident who tried to attend but met crowds of people who had been told to return home. Members of the military, federal police and regional police were out in force, he said.

“It is very sad that his body is accompanied by only a few people and security forces are keeping many others away,” one of Haacaaluu’s relatives, who had been allowed to attend the funeral, told Reuters. – Guardian

1 Chairman of Fáilte Ireland resigns after it emerged he is holidaying in Italy
2 Urgent report on Dublin eviction ordered by Deputy Garda Commissioner
3 A million trees, including 400,000 oaks, to be destroyed this week
4 ‘It was pitch black’ - Rescued teenager describes night afloat with her cousin in Galway Bay
5 Inside the O’Brien Fine Foods factory in lockdown Kildare
Real news has value SUBSCRIBE