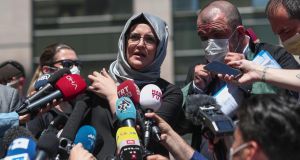 Hatice Cengiz, the fiancee of murdered Saudi journalist Jamal Khashoggi, speaking to the media outside the court in Istanbul on Friday. Photograph: Sedat Suna/EPA

The fiancee of the murdered Saudi journalist Jamal Khashoggi has told a Turkish court that all avenues for justice must be explored as 20 Saudi officials went on trial in absentia over the gruesome killing and dismemberment in Istanbul in 2018.

Taking the witness stand on Friday morning at Istanbul’s Çaglayan courthouse complex, Hatice Cengiz had to pause several times to stop her voice from breaking. The absence of the 20 defendants, as well as Khashoggi’s still missing remains, weighed heavily over the proceedings.

“This has been an exhausting process both mentally and morally,” Ms Cengiz told reporters outside the building after the three-hour hearing concluded.

The trial is being closely watched for new information or evidence into the killing and what happened to Khashoggi’s body, which has never been found.

Prince Mohammed strenuously denies any involvement in the killing and, despite an international outcry, was staunchly defended by the US president, Donald Trump.

Khashoggi broke with the Saudi elite in 2017, disillusioned with Prince Mohammed’s empty promises about democratising the kingdom. He moved to the US and became a columnist for the Washington Post, often criticising Saudi policy.

While visiting the Saudi consulate in Istanbul in October 2018 to pick up paperwork for his marriage to Ms Cengiz, a Turkish national, Khashoggi disappeared and was never seen again. After a series of shifting explanations, Riyadh eventually admitted the 59-year-old had been killed in what it says was an extradition operation gone wrong.

Prosecutors are seeking life in prison for 20 Saudis on charges of “premeditated murder with monstrous intent, causing torment” – 15 individuals accused of carrying out the killing, and a further five of planning it.

Two men in Prince Mohammed’s inner circle – the former deputy head of general intelligence Ahmed al-Asiri, and the former royal court adviser Saud al-Qahtani – are among the defendants, along with Maher Mutreb, an intelligence operative who frequently travelled with the royal on foreign tours, forensic expert Salah al-Tubaigy and Fahad al-Balawi, a member of the Saudi royal guard.

A previous trial held behind closed doors in Riyadh sentenced five unidentified people to death over Khashoggi’s killing but in effect exonerated Asiri and al-Qahtani, the men close to the crown prince.

Agnes Callamard, the UN special rapporteur who authored a 2019 report into Khashoggi’s killing, said in Istanbul that the trial was an “important formalised step” in the search for justice.

“Before we had media reports, my own report . . . now we have moved the investigation into a formal setting completely different to the trial in Saudi Arabia, which did not have any legitimacy,” she said. “For the first time we have a number of those who carried out and commissioned the crime indicted . . . although not everyone is indicted,” she said.

Riyadh has repeatedly rejected Ankara’s calls for the suspects to face trial in Turkey. A statement of forgiveness for the killers from Khashoggi’s family in May this year is widely assumed to have been extracted under pressure in order to grant the convicted men clemency.

The atmosphere in the Istanbul courtroom was tense on Friday. Several workers at the consulate and consul-general’s residence appeared reluctant to testify, at one point leading one of the judges to snap at a witness who said he could not remember specific details.

Turkish investigators have explored several lines of inquiry in trying to determine what happened to Khashoggi’s body. An indictment issued in March suggested that officials were now focusing on a large tandoor-style oven in the Saudi consul-general’s residence.

Zeki Demir, who worked there, testified on Friday that he was asked to come into work to light the oven after five or six men he did not know and described as “guests” had failed to start it. After he made a joke about “falling in the tandoor and becoming kebabs”, the atmosphere in the room soured and he was asked to leave, he said. When he returned to work a few days later, the oven and its marble surrounds had been cleaned with bleach.

Turkish investigators allege that the oven is capable of reaching temperatures of 1,000 degrees celsius, sufficient to remove any DNA evidence.

Yasin Aktay, a senior adviser to the Turkish president, Recep Tayyip Erdogan, and a close friend of Khashoggi, told the court he had warned his friend not to visit the Saudi consulate and that all the defendants “should trust the Turkish judiciary and submit themselves to justice”.

A team of 14 Turkish state-appointed lawyers were present to represent the Saudi defendants, although none had managed to speak to their clients.

Turkey’s pursuit of the Saudi defendants is widely viewed as hypocritical in a country that routinely locks up dissidents and has hollowed out its own judicial system, replacing independent judges with government-loyal officials.

Erdogan has used the killing to exert pressure on his Saudi regional rivals, saying Turkish intelligence found that the order to murder Khashoggi came from “the highest levels” of the Saudi government, but he has never directly blamed Prince Mohammed.

Ms Callamard is calling for an independent international investigation into what she described as a “premeditated extrajudicial execution”.

The special rapporteur also expressed surprise that other countries had not sent representatives to observe the opening of the case and said she hoped the international community would support the search for justice in the next hearing on November 24th.

The US in particular had a role to play, she said. “The one country that has claimed to have real evidence of Mohammed bin Salman’s responsibility is the USA. So far Congress’s efforts to get to the bottom of what happened have been hampered by the White House.

“There is still a lot of information that has not been made public. Maybe after [the US] elections in November there will be a change in attitudes from the White House on this matter.” – Guardian