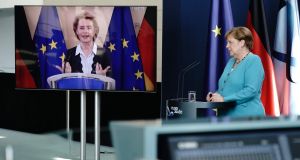 German chancellor Angela Merkel appealed to the European Union to come together and agree a “massive” economic recovery deal to address the profound damage of the coronavirus pandemic as she took the reins of the EU presidency.

“Europe is in the most difficult situation of its history,” Dr Merkel said in a joint press conference with European Commission president Ursula von der Leyen on Thursday. “There has to be an agreement during the summer. I can’t imagine another outcome.”

Germany this week assumed the rotating six-month presidency of the Council of the EU, meaning Dr Merkel will chair the debates between the national leaders as they try to bridge deep divisions over how to stop the virus tipping the bloc into deep economic depression.

The 27 national leaders are preparing to meet in Brussels on July 17th and 18th in their first physical gathering since the virus halted international summits.

On the table is a €750 billion proposal of loans and grants that would be targeted towards the countries hardest hit by the virus and its fallout, in a recovery plan funded by jointly guaranteed EU borrowing by the European Commission that some see as a leap forward in integration for the bloc and a counter to a structural flaw in the euro.

Across the continent, the virus has killed 192,500 people, with the worst-hit countries the United Kingdom, Italy, France and Spain. The pandemic has shuttered businesses, increased unemployment, and forced governments to take on debt to support companies and prevent citizens from falling into poverty.

“In such times, solidarity is a test,” Dr Merkel said.

Once one of the EU’s strongest advocates for fiscal frugality, Germany has changed its policy due to the pandemic and is urging the countries that oppose extra spending, joint debt and distribution of funds from stronger to weaker economies to set aside their objections and agree to an unprecedented common response to stop cracks in the EU from widening.

The so-called Frugal Four of Austria, Denmark, Sweden and the Netherlands face deep domestic political opposition to plans seen as the richer north bailing out the poorer south, and have called for the recovery proposal to be cut back in size and involve loans given on condition of economic reforms, rather than grants that have no strings attached.

As they held their joint press conference, Dr Merkel and commission president Ms von der Leyen remarked that it was unprecedented for both roles to be held by women.

Ms von der Leyen, a German former defence minister who served under Dr Merkel, indicated the two would form a close team as they try to bring the EU to consensus.

“Luckily we’ve known each other for a very long time. We trust each other implicitly,” Ms von der Leyen said. “And since we know each other so well, communication is very efficient. We can speak plainly.”