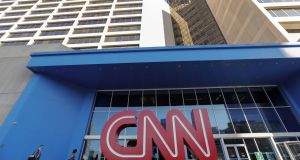 A suspicious package addressed to CNN was intercepted in Atlanta on Monday, bringing to 15 the number of potentially explosive devices sent through the mail this last week.

The package, detected in an Atlanta mailing station, did not reach CNN HQ which is located in the city.

It is the first parcel to have been detected since 56-year-old Cesar Sayoc was arrested on Friday, and the third addressed to CNN. Mr Sayoc, who has a long criminal history, is due to appear in a Miami court later on Monday.

He faces five federal charges and could spend up to 58 years in prison if convicted. But he is likely to ultimately face prosecution in New York.

There were also unconfirmed reports that the FBI has retrieved a list of approximately 100 individuals who the suspect was trying to target during searches of his van and belongings. It is understood that law enforcement officials have begun contacting people on the list.

The development comes as US president Donald Trump renewed his attack on the media as “the enemy of the people”. He blamed “fraudulent” reporting for a recent spate of violence in America.

Another suspicious package addressed to CNN has been intercepted. This time in Atlanta. All mail is being screened off site. Note from Jeff: pic.twitter.com/I6TXSkoluQ

There is great anger in our Country caused in part by inaccurate, and even fraudulent, reporting of the news. The Fake News Media, the true Enemy of the People, must stop the open & obvious hostility & report the news accurately & fairly. That will do much to put out the flame...

In a series of tweets on Monday Mr Trump said that the “great anger in our country” was caused in part by “inaccurate, and even fraudulent, reporting of the news”.

“The Fake News Media, the true Enemy of the People, must stop the open & obvious hostility & report the news accurately & fairly. That will do much to put out the flame of Anger and Outrage and then we will be able to bring All sides together in peace and harmony. Fake News Must End!” he said.

His tweet followed similar comments on social media in the preceding 24 hours in which he attacked the media.

“The Fake News is doing everything in their power to blame Republicans, Conservatives and me for the division and hatred that has been going on for so long in our Country. Actually, it is their Fake & Dishonest reporting which is causing problems far greater than they understand!”

His comments came at the end of a week of violence in the United States that has left the country shaken a week before the mid-term elections.

On Saturday a gunman opened fire at a Synagogue in Pittsburgh killing 11 people, in the deadliest attack targeting Jews in US history. The suspect, 46-year-old Robert Bowers, was released from hospital on Monday morning ahead of a court appearance later today.

Mr Trump’s description of the media as “the enemy of the people” was denounced by opponents as insensitive and provocative.

Democratic senator Chris Murphy tweeted: “This is, for all practical purposes, a call for more violence against the press. My god . . . what is happening???”

Mr Trump also raised the issue of the migrant caravan making its way through central America on his twitter profile. While the northward journey of the group of migrants dominated news coverage in the United States in recent weeks, the recent spate of violence has been the main focus of news in recent days.

In a tweet Mr Trump warned that “many gang members and some very bad people” are mixed into the caravan. “This is an invasion of our Country and our Military is waiting for you!,” he tweeted.